(Minghui.org) On November 21, 2012, Mr. Hsu Chao-chun, president of the Chiayi Medical Doctor Association in Taiwan, called on his associates to take a stand against the Chinese Communist Party's (CCP) practice of live organ harvesting. 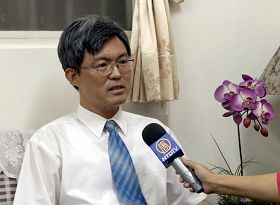 Recently, medical circles in the United States and Taiwan conducted petition drives to protest the CCP’s crime of live organ harvesting. So far, more than 1,000 doctors and over 500 medical personnel have signed the petition.

About 90 percent of the organ transplant patients in Taiwan had traveled to mainland China for their operations. Mr. Hsu pointed out that doctors must not become accomplices to the CCP’s crimes against humanity. “The source of organs could be from Falun Gong practitioners,” he hastened to point out. “If it is true, I think it should be condemned. We doctors should sign the petition and call on everyone to refrain from going to China to secure organs from unknown sources.”

He continued, “Doctors are supposed to save lives, not harm people. One should not use his profession for ill-gotten gains; and doctors who do so should be condemned. Our government should have laws in place to restrict such acts.”

Since 2006, Canadian investigators, David Matas, an international human rights lawyer based in Winnipeg, Manitoba, and David Kilgour, former Canadian Secretary of State (Asia-Pacific), have conducted independent investigations into the allegations of widespread, live organ harvesting in China. Based on the vast amount of evidence that they collected, they concluded that the allegations are true, and that possibly tens of thousands of Falun Gong practitioners had already been killed for their organs in China.

After Taiwanese media reported on the issue of live organ harvesting in China, medical circles in Taiwan are paying close attention to the CCP’s atrocities. The Taiwan International Organ Transplantation Care Association responded positively to a request made by the Doctors Against Forced Organ Harvesting in Washington DC, to urge doctors in Taiwan to sign the petition.