(Minghui.org) On November 5, 2012, a motion was initiated by Bob Doris, a Member of the Scottish Parliament, to condemn the Chinese Communist Party's (CCP) immoral practice of organ harvesting from living Falun Gong practitioners and other prisoners of conscience. His motion, which urged the United Nations to thoroughly investigate this atrocity, quickly won the support of 29 members of the Scottish Parliament. 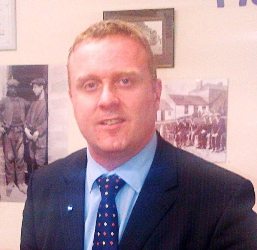 As more details came to light following the attempted defection of Wang Lijun, former Chongqing police chief who has been instrumental in the organ harvesting crimes, the UN, along with numerous international human rights groups and dignitaries from around the world, expressed grave concern over the CCP's practice of live organ harvesting. Some condemned the practice as an "unprecedented evil on this planet."

Doctors Against Forced Organ Harvesting, a medical advocacy group made up of doctors from a number of countries, recently launched a petition urging the UN to set up an independent panel to thoroughly investigate the allegations of live organ harvesting by the CCP, and to help put an end to these atrocities. The petition received 100,000 signatures, including that of Bob Doris and other MPs.

MP Doris explained: “I am appalled by these most serious allegations regarding organ harvesting in Chinese prisons. I was pleased to sign the petition and I would encourage others to do likewise.”

He continued: “Respected international figures have collated evidence which substantiates the allegations, and the United Nations must take their representations seriously. This is a violation of the most basic human rights standards established by the UN, and I urge them to take action to stop such atrocities.”

The following is the contents of the dynamic motion lodged by MP Bob Doris in the Scottish Parliament:

The Scottish Parliament abhors what it understands is the practice of live organ harvesting in Chinese prisons;

(The Parliament) is appalled by these most serious allegations that approximately 65,000 members of the banned Falun Gong spiritualist group have been killed by the CCP for their organs;

(The Parliament) recognizes that political dissidents and members of minority groups, including the Uyghur and Tibetans, are also believed to be among the victims;

(The Parliament) understands that organs are often harvested from live prisoners for sale on the black market;

(The Parliament) applauds what it sees as the efforts by human rights activists, including Nobel Peace Prize nominee David Matas, co-author of Bloody Harvest - The Killing of Falun Gong for their Organs, to bring these atrocities to the attention of organisations such as the UN;

(The Parliament) understands that over 100,000 people have signed the petition to the UN on Doctors Against Forced Organ Harvesting petition, with over 14,000 of those signatures coming from the UK;

(The Parliament) welcomes discussions by the UN Human Rights Council and the US Congress on this issue in September 2012, and urges the UN to investigate and put an end to these atrocities.