(Minghui.org) In the past two weeks, Falun Gong practitioners have held numerous signature collection activities in Basel, focusing public attention on the Chinese Communist Party's (CCP) atrocity of forced organ harvesting from living Falun Gong practitioners and urging the United Nations to conduct an independent investigation into this crime as soon as possible. Those who signed in support came from all walks of life from dozens of countries across four continents, including residents, students, police officers, businessmen, artists, Tibetans, nuns, Christians, IT specialists, professors, doctors, lawyers, MPs, and heads of human rights organizations. 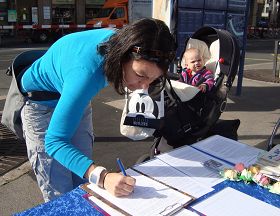 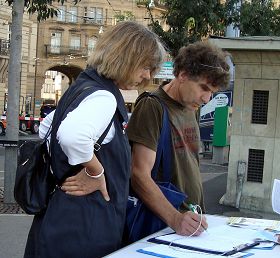 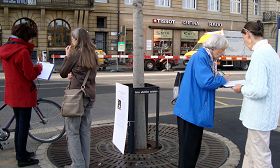 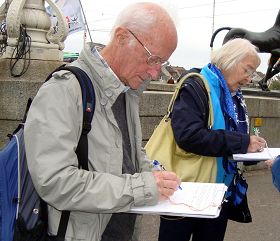 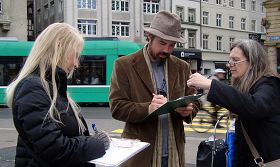 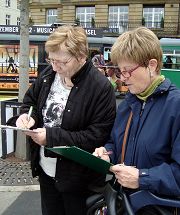 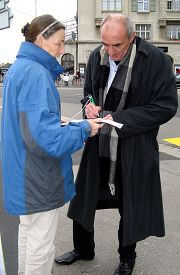 Basel is the second largest city in Switzerland and a key European city at the juncture of Switzerland, Germany, and France. It is also home to the three largest Swiss biochemical companies. One of them, the Roche Pharmaceutical Group, was named the "most contemptible company” on the opening day of the World Economic Forum in Davos in 2010. Two non-governmental organizations made the designation due to the company's connection with forced live organ harvesting. Knowing full well that the sources for organ transplants in China are questionable, Roche has continued to support unethical transplantation by selling Cellcept to China over the years. The drug inhibits the body's rejection of foreign organs. Roche also conducted two clinical trials on the drug’s effectiveness on more than 300 transplanted organs across a number of hospitals in China. Swiss human rights expert Arne Schwarz urged Roche to return to morality.

A German doctor: If live organ harvesting of Falun Gong practitioners is not stopped, that is a big problem!

A practitioner asked a middle-aged gentleman leaning against a car for his signature. He said angrily, "Oh, I know about this, but it still startled me. It's blindsided me. It is so serious, so terrible, I have to calm down." He said he was a gastroenterologist. "This thing is so big. I will sign." Taking the petition form, he signed straightaway.

The practitioner asked why he was so angry before. He said that he had just run into a group of Jews protesting German Nazis: "Your petition reminded me that this is more appalling than what the Nazis did, which goes to show that the root of evil was not dealt with and was rekindled in China. The Jews' protest is reminding people today not to forget history. "

He asked the practitioner, “Are you Chinese?” The practitioner said he was and then asked the man, "Have you ever been to China?" He said, "I really want to go, to take a closer look, rather than a fleeting glance. But I've never managed to find a long enough holiday to travel to China. When I hear more and more about organ harvesting taking place in China, I’m slowly losing my interest in going. The China that I have been fascinated with and what is on this petition form do not add up, which makes me very depressed, even sad."

He said that German doctors were all aware of it. The practitioner asked what his colleagues thought about it. He said, "This is, of course, a terrible thing!" He said the petition was very necessary to let more people know about it, to pressure the politicians and the government into stepping forward to intervene. The practitioner suggested that he could take some information back to his colleagues. He said, "Sure, give me some more."

Seeing he had crutches beside him and his foot bandaged, the practitioner wished him a speedy recovery. He said, "Thank you! In a few days my foot will heal. This is not a problem." He pointed to where the Jewish protestors had been and said, "They are not a problem either. That is history, which can be solved. It is your issue (the CCP’s live organ harvesting of Falun Gong practitioners) that is the problem. It is a reality, and if, not stopped, it is a big problem!” The practitioner thanked him again for his support. He said, "I wish you good luck!"

German businessman: Do not give up, it definitely works!

A 50-year-old gentleman was sitting in a car waiting in the parking lot. When a practitioner asked him for his signature, he at first refused. He said he was in the business of buying and selling leather goods. He often traveled to India and China and had long been aware of the problems with Chinese organs. He believed that politicians in each country knew about this, but their governments pretended not to know in the economic interests of their respective countries. "I am disappointed with this world. I've lost confidence, and I am very sad! It is useless for you to distribute leaflets or to collect signatures. It cannot solve the problem. The CCP is so overbearing, and the big countries are so selfish. What can you hope to achieve with this?” Silent for a moment, he said sympathetically, "You would certainly be arrested in China."

The practitioner said, “I am on the blacklist, so I have not been back to China for ten years. Because I will not give up on my faith, if I went back I would be kidnapped, tortured, and even have my organs harvested while I was still alive. But I have been distributing leaflets and clarifying the truth for a decade. I will continue to tell people wherever I go, to let everyone I run into know, about the crimes against humanity committed by the CCP. I believe this will work sooner or later.”

The man cheered up and said with a smile on his face, "It would be great if everyone did the same. Do not give up! It makes sense. If everyone knows, the politicians will be pressured. People will not vote for them, and they will lose their seats.”

Seeing the owners of the car in front of him appear, he reminded the practitioner, "Quick! Ask them to sign." He soon gestured the practitioner over, saying the car next to him had just stopped. The owner had heard him explain the petition and agreed to sign. Before the man's friend returned from shopping, he had helped to collect several signatures. A few times he said to practitioners, "Do not give up, it definitely works!"

Hong Kong IT engineer: I never thought the CCP was this bad!

A middle-aged Chinese lady was waiting at a bus stop, pulling a trolley. From Hong Kong, she had come to work in Basal as an IT professional. Signing the petition, she said to the practitioner with a heavy heart, "What I worried about has happened. A few years ago, I heard about organ harvesting that was taking place in mainland hospitals. Because it was so horrible, I did not want to hear about it or dare to believe it. It now appears to be true. The CCP is bad, but I never thought it was this bad! Since the handover, life is uncertain. The evil Party's shadow is everywhere in Hong Kong. If it can do something like this, what evil does it not dare to do?!"

Canadian: I support the efforts to end the persecution

A middle-aged Western gentleman passed the information stand. He spoke English and said he was a Canadian on a work assignment in Basel. After listening to practitioners explain the petition, he said, "I do not know much about Falun Gong, but I am opposed to the persecution. No matter what, the persecution should not happen. It violates human rights. Persecution such as organ harvesting is an especially gross violation of human rights. I support the efforts to oppose the persecution and of course want to sign. "

He said his wife was from Shanghai. He thought that her mind was filled CCP propaganda about Falun Gong as being political. The practitioner asked him to tell his wife that it was CCP propaganda that was slandering Falun Gong and that she should check out the truth in mainstream overseas Chinese media. They advised him that it was very dangerous to believe the CCP's lies.

Swiss Doctor: Maybe I can do something

An older gentleman took out his reading glasses to carefully read the petition form. One page was nearly filled with signatures. He read out the nationalities of the doctors who had signed, “Germany, Switzerland, India, China, Canada, Japan. Oh, the whole world is paying attention to this. Great!"

He said he was a local otolaryngologist. He knew that there was an acute shortage of organ donors, that many people were waiting for cornea transplants, but that there was no supply. Because there is a demand, he reasoned that there could be black markets for selling organs, which may not be limited to China. The practitioner said that in other countries it was done by underworld criminals, whereas the situation in China was different: It was done systematically, under government protection, with military hospitals' direct participation. It was large-scale theft of illegally detained Falun Gong practitioners’ organs, which were sometimes removed without anesthetics while the person was still alive.

The old gentleman silently gazed at the practitioner from above his reading glasses, listened intently, put up his reading glasses, picked up the pen, and signed his name. He pointed to the page of description in German and asked, "May I take it with me? I would like to read it carefully. Maybe I can do something."