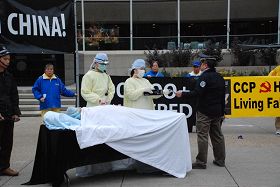 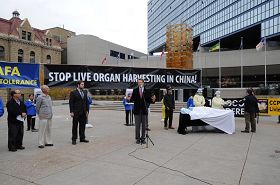 Jenny Yang, spokesperson for the association, said that the organ harvesting atrocities were brought to light in 2006, although the persecution of the practice started in 1999. “The persecution has resulted in the deaths of thousands and it is still happening in China. We are here today to appeal to all kindhearted people to help us end this appalling massacre,” said Yang. “The CCP’s atrocity of harvesting organs from living Falun Gong practitioners is far beyond the atrocities committed by the Nazis. Renowned human rights attorney David Matas described it as 'an unprecedented evil on this planet.'” 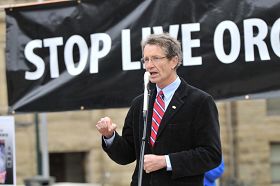 Dr. David Swan, a member of the Alberta Legislative Assembly, urged the Canadian government to listen to its citizens, investigate the persecution, and help stop it. 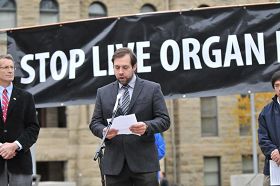 Dan Leby, executive secretary of MP Rob Anders, attended the rally on behalf of the MP

Dan Leby, executive secretary for MP Rob Anders, read a letter from the MP at the rally. In the letter, Mr. Anders stated that everyone must stand up against the Chinese Communist Party and he wanted to join the practitioners to say NO to the tyranny. 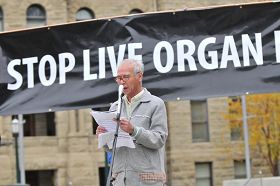 Mr. Tang, chairman for the Calgary Association for the Promotion of Democracy

Mr. Tang is the chairman of the Calgary Association for the Promotion of Democracy. He attended the rally to condemn the organ harvesting. He commented that the Chinese Communist Party is doomed and that its tyranny will end when its crimes are fully exposed. “Since the Communist Party assumed power, over 80 million Chinese people have died as a result of its tyranny. Now it is persecuting Falun Gong practitioners. While using violence to stay in power, it sells harvested organs for profit. I am here to uncover this crime. You must know the truth so that you can understand what this regime is really like and what kind of crimes it has tried to conceal.”

Ms. Huang, who was incarcerated in China for practicing Falun Gong, shared her personal account of the persecution. Reporters from local media outlets such as the Canadian Press, CTV, the Calgary Herald, and Metro attended the rally.