(Minghui.org) Falun Gong practitioners in Germany held a petition drive on October 20 in Freiburg im Breisgau, a well-known south German university town and tourist destination, to urge the UN to conduct an independent investigation into the forced live organ harvesting condoned by the Chinese Communist Party (CCP) and to stop this atrocity as soon as possible. 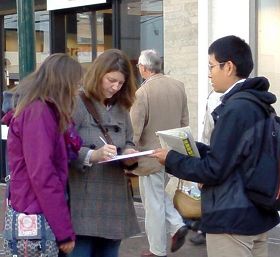 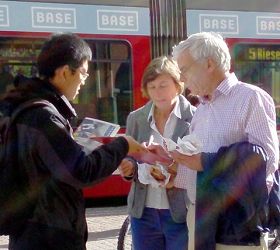 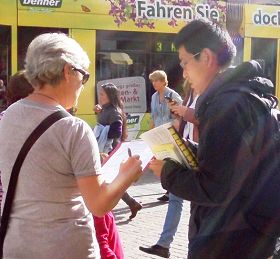 Freiburg is also the gateway to the famous Black Forest area. October 20 was a fine day, and there were many people on the streets, including local residents, tourists, and university students. When they learned of the forced live organ harvesting, they were shocked and angered. They signed the petition to support efforts to urge the UN to carry out an independent investigation.

A young lady was walking by in a rush, but after hearing about the live organ harvesting, she stopped and asked, “What are you talking about? Live organ harvesting?” She went back to pick up the petition and signed after reading the explanation. She commented, “Where is the decency in this world?”

A middle-aged man took the petition form, read the explanation very carefully, and then signed his name. He said, “I think what you are doing is very good. Such things must be stopped. I hope this will be a success.”

A middle-aged couple read the petition explanation carefully. The gentleman asked, “Will you be able to go back to China if you are involved in such an activity?” A practitioner answered, “I am afraid not, at least for now.” Then he asked, “If I sign the petition, will I get into trouble if I go to China?” His wife chimed in, “We should not fear them. There is nothing to be afraid of!” As she spoke, she signed her name, and her husband followed suit.

A young university student came, and a practitioner told him about the live organ harvesting. The young man was dismayed and said that such a thing was unimaginable. After a while the young man brought a group of friends to the event. As they all signed the petition, the young man smiled broadly at the practitioner.

A middle-aged woman was upset after talking with a practitioner. She asked, “Does this mean they are removing the organs in a hospital while the victim is still alive? This is unbelievable and has gone far beyond the worst imaginable.” She signed, too.

When asked to sign the petition, a passing tourist replied, “Of course, I will sign it right away.” It turned out that she already knew about the CCP’s live organ harvesting. After signing the petition, she said, “I am delighted to sign for you. I wish you success!”

“Ms. He Yingtao’s Personal Account of Persecution--Husband Wrongfully Indicted and Dies As a Result of Torture”