(Clearwisdom.net) Today's news from China includes incidents of persecution that took place in 15 cities or counties in 8 provinces. According to this report, 15 practitioners were subjected to mistreatment during their detention and at least 20 practitioners were illegally arrested. 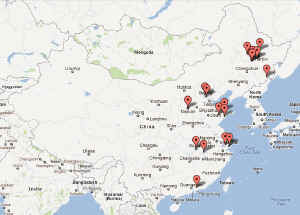 Mr. Li Guangshi, a practitioner in his 30s, was detained in forced labor camps twice in the past. In 2008 he was sentenced to five years of imprisonment and is currently in Jilin Prison. Both his wife and parents-in-law practice Falun Gong. During the 12 years of persecution, his wife suffered a mental collapse and his parents-in-law passed away. Prison officials have recently kept Mr. Li in solitary confinement for more than two months.

Ms. Wang Xiuying is from Xiaodian Village in Pudong Town. Agents from the Chaohai Police Station and the local Domestic Security Division went to her home on the morning of November 1, 2011. In addition to arresting Ms. Wang and her husband (who is not a practitioner), the agents also confiscated Falun Gong books and personal belongings, including a car, a computer, and a cell phone. Five days later her family asked that these items be returned. Agents released her husband five days later. Lingshan Town Police Station officials took Ms. Wang to a forced labor camp in Ji'nan City on November 4 to serve a term of one year.

Mr. Fan Baoshun is from Fanjiatuan Village, Zhaoyuan City. When he distributed truth-clarification materials on the evening of December 17, 2011, Qishan Town police arrested him and held him.

Qiaozi Town 610 Office head Liu Yutian and police agents from the Huairou Detention Center ransacked the following practitioners' homes on the evening of November 17, 2011: Ms. Sun Guiqing (60 years old), Ms. Wang Baohua (46), Ms. Wang Yalan (50), and Ms. Ma Yuzhi (62). The agents arrested all of them except for Ms. Ma, who was not at home. Ms. Wang Yalan was taken to the Xicheng Detention Center. After detention center officials refused to accept her due to high blood pressure, she was released on bail. Because it was night when Ms. Sun and Ms. Wang Baohua were arrested, they were not wearing many clothes. For more than a month, the police refused to let their families visit them even though they needed more clothing.

Ms. Li Chunlian and Ms. Li Yinghe were arrested. They are now in the Erzhigou Detention Center.

Ms. Pan Deqing, 66, is from Tianlin 14th Village in the Xuhui District. After she was arrested on June 30, 2011, court officials sentenced her in September to a prison term of three years and six months.

Ms. Pan has been persecuted numerous times since the persecution began in July 1999, first in a detention center, then in a forced labor camp for a term of 18 months, and later in a labor camp for four years and six months.

After being held at the Wuhan Women's Forced Labor Camp for 15 months, Ms. Xiao Yingxue was arrested again on October 6, 2011. For several weeks, her whereabouts were unknown.

After missing for several weeks, Ms. Xiao was suddenly taken home on December 1. After picking up some winter clothes, she was immediately taken away again. She told her father, who is over 70 years old, that she was being held at the Hubei Province Brainwashing Center.

Wanlong Township police went to the home of Guangning Village practitioner Mr. Xue Ruihui on the afternoon of December 17, 2011. Although his wife has late-stage cancer and he needs to take care of her, the police ignored their plight and took Mr. Xue to the police station. He was later sent to the Shuangcheng Detention Center.

When Qiu Hong and another practitioner talked about Falun Gong to other people one day in June 2010, police arrested them and took them to a police station. The police held them at a detention center for five days.

When 69-year-old Ms. Wang Guiying clarified the truth near her home in late November 2011, police arrested her and held her in the Yazijuan Detention Center in the Daoli District.

Ms. Dong Qingxiang is from Shuangbuzi Village in the Xiashan District of Weifang City. When she clarified the truth of Falun Gong at a farmers' market on May 28, 2011, plainclothes police agents arrested her. They also confiscated her personal belongings, including a DVD copier, a computer, a printer, and DVDs. Ms. Dong was recently sent to the Wangcun Women's Labor Camp in Zibo City for a term of one year.

When Ms. Li Guiying was in the Gutangao Detention Center, she refused to do forced labor or wear the prison uniform. She also insisted on doing the Falun Gong exercises. Detention center officials ordered her to submit to a physical examination, but she refused. Huizhou City 610 Office officials later sent her to the Sanshui Labor Camp.

Sixty-five-year-old Ms. Wei Jianhua was arrested on December 12, 2011, and is currently in a detention center.

More than 10 agents from Longganhu Police Department arrested Ms. Pan Haifeng on December 2, 2011, and confiscated her laptop, cell phone, and other personal belongings. This is the ninth time Ms. Pan has been arrested. She was later sent to the Wuhan City Brainwashing Center.

Mr. Chen Zhaoyang, 67 years old, was a practitioner from Yangfang Village in Yangfang Town in the Changping District. Yangfang Town police and 610 Office agent Liang Shuming arrested him in early 2001 and sent him to a labor camp for a term of one year. His wife was seriously ill at the time. With nobody to take care of her, she passed away soon afterward.

Because he told others the truth about Falun Gong, Mr. Chen was arrested by Yangfang Town police again on October 7, 2002. They detained him and tortured him for two days. To avoid further persecution, Mr. Chen left home the morning of October 10, 2002. Since then, his whereabouts have been unknown.

Ms. Li Shichun, in her 70s, is from Qianbai Village in Yangfang Town in the Changping District. She was arrested after the persecution started in July 1999. After her release, the police came to her home many times to harass her and interfere with her daily life. She left home in October 2002 and no one knows where she is.