(Clearwisdom.net) The 1999 appeal of an estimated 10,000 Falun Gong practitioners near the Chinese Communist Party's (CCP) Zhongnanhai compound in Beijing is well known, but knowledge is generally lacking about the events that precipitated that event, now known as the April 25 Appeal. Prior to that, day police in Tianjin had arrested more than 40 Falun Gong practitioners for no reason. Moreover, the CCP had already begun harassing and suppressing Falun Gong practitioners during the previous several months out of the blue. Thus, the April 25 appeal was a rational, legal, and peaceful outgrowth of an increasingly apparent policy shift by the CCP against Falun Gong. 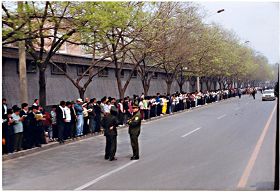 On April 25, 1999, more than 10,000 Falun Gong practitioners conducted a peaceful appeal. Practitioners quietly read while waiting for a response.

Falun Gong teaches people to be just and kind through adherence to the principles of Truthfulness-Compassion-Forbearance. The amazing health benefits of the practice spread by word of mouth, and soon benefitted over 100 million cultivators. But Jiang Zemin, then-head of the CCP, became jealous of Falun Gong's impact on people and the enthusiasm with which they embraced it, so he instigated the persecution of Falun Gong. In order to justify the persecution, he directed the CCP propaganda apparatus to describe the peaceful April 25 appeal as a “group attack on the Zhongnanhai compound.” Some people are still deceived by this lie.

In fact, during the entire April 25 appeal, Falun Gong practitioners were very peaceful and calm. They didn't hold any banners or shout any slogans. They didn't obstruct traffic or pedestrians. There was no “group attack.” Besides, the central location was not Zhongnanhai, but the National Appeals Office at Fuyou Street.

During the past 12 years, Falun Gong practitioners have always conducted themselves in an rational way. Practitioners outside of China have done the same in their local communities. Practitioners in China have never taken revenge on those who harmed them, even though the persecution is brutal and inhumane.

Some people mistake the April 25 appeal as the CCP's justification for persecuting Falun Gong. Nothing could be further from the truth. Given Jiang's perspectives on power and control, wouldn't any excuse have sufficed? Falun Gong practitioners were only exercising a legal right bestowed upon them by the Chinese Constitution.

Suppression Started As Early As 1996

In order to gain political advantage, some politicians and CCP-employed thinkers started slandering Falun Gong in 1996. On June 17, 1996, the CCP mouthpiece Guangming Daily published an editorial badmouthing Falun Gong. On July 24, 1996, the CCP's General Administration of Press and Publication, which is under the Department of Propaganda, sent an internal notice to all bureaus on the provincial and municipal level that banned the printing of Zhuan Falun, China Falun Gong, and other Falun Gong books. In 1997, the Department of Public Security contrived to criminalize Falun Gong, and started collecting evidence nationwide to substantiate the scheme. After the Public Security Bureaus in different locations reported “no issues yet,” the investigation stopped.

So, as early as 1996, the CCP had begun to scheme against Falun Gong.

In May 1998, the “Beijing Express” program utilized its footage of Falun Gong practitioners doing the exercises in Beijing Yuyuantan Park and the remarks of He Zuoxiu to slander Falun Gong. After the program was broadcast, hundreds of practitioners in Beijing and nearby Hebei Province wrote letters or visited the TV station to point out that the program was misleading and not based on facts. On June 2, after an investigation, the Beijing TV Station admitted its mistake and broadcast a positive program about Falun Gong.

On April 11, 1999, He Zuoxiu published an article in the Youth Science Expo magazine by Tianjin Education Institute. He cited the initial 1998 “Beijing Express” program to slander Falun Gong. Upon seeing the article, some Falun Gong practitioners went to Tianjin Education Institute and other agencies to report the misrepresentations over the week of April 18-24. Practitioners offered their personal accounts of the practice to the editors and secretary of the magazine, which belied the misrepresentative article.

Tianjin government's tough stance implied some pressure from the “top down.” Yet, from firsthand experience, Falun Gong practitioners firmly believed that Falun Gong was good. So, beginning on the night of April 24, many practitioners in different locales who wanted to seek a solution to the Tianjin incident by appealing, went where they were told to go--Beijing.

On April 25, 1999, more than 10,000 Falun Gong practitioners went to the National Appeals Office near the Zhongnanhai compound. At about noon, the then Chinese premier met with practitioner representatives, who made three requests: 1) Release the practitioners arrested in Tianjin; 2) Allow practitioners to practice without harassment; 3) Allow publication of Falun Gong books.

The premier quickly ordered the release of the arrested practitioners and reassured everyone that the government would not intervene with citizens' exercises. At 10:00 p.m., the 10,000 practitioners left quietly. The entire event was quiet and orderly. After the practitioners left, there was not one piece of trash on the street. Practitioners even picked up the cigarette butts thrown on the ground by police. Some police officers commented, “Look, this is virtue!”

A Secret Order from the Head of the CCP

On the night of April 25, Jiang Zemin wrote to the CCP Politburo Standing Committee and other CCP leaders. In the letter, he claimed that “it will be a big joke if the CCP cannot defeat Falun Gong.” This letter was passed down to CCP cadres at lower levels as an internal classified document.

Jiang's hope of “eliminating Falun Gong in three months” was admitted, as well as the launch of the 610 Office. Furthermore, the evil policy “tarnish their [practitioners'] reputations, ruin them financially, and exterminate them” was spelled out in the letter.

In short, the nature of the CCP is “deception, evilness, and violence.” The CCP's history is proof of this. Ever since its inception, the CCP has never been above violence, and using violence in its persecution of Falun Gong is merely the latest example.