(Clearwisdom.net) On July 17, 2011, Falun Gong practitioners in Bangalore held truth-clarification activities at Forum Mall located in the heart of the city, to protest the Chinese Communist Party's (CCP) 12-year persecution of Falun Gong. Practitioners distributed fliers in three different languages (English, Hindi, and Kannada), and collected signatures calling for an end to the persecution. In the evening a candlelight vigil was held in memory of practitioners who have died from the persecution. 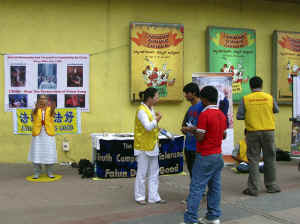 The practitioners began their truth-clarification activity in the morning. They talked to mall visitors about Falun Gong, and distributed flyers. Many people who took the fliers inquired about the practice and the persecution, and were surprised by the fact that innocent people have been persecuted for 12 years for following such a peaceful and wonderful practice.

Several practitioners created a video on the persecution, which was shown continuously all evening. People watched it carefully and became aware of the truth through the lyrics and music in the video. 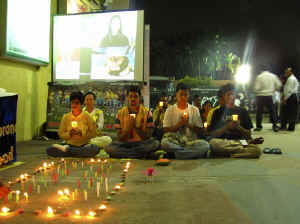 In the evening a candlelight vigil was held. Many passersby were moved by the vigil and joined the practitioners, holding lighted candles in their hands.