(Clearwisdom.net) On July 20, 2011, practitioners in Poland held a series of activities in Warsaw to call for an end to the 12-year brutal persecution of Falun Gong by the Chinese Communist Party (CCP).

In the morning, practitioners did the exercises in Krasinskich Park near the Chinese Embassy in Warsaw. Their gentle and peaceful practice continuously attracted the attention of people in the park who stopped to watch or follow along with the movements. 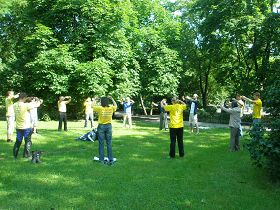 Zosia, who came across the event while on her daily walk, said, “Falun Gong is so peaceful and beautiful. I want to learn.” A practitioner told her that practitioners in China have been subjected to brutal persecution for twelve years. Zosia was shocked and said, “Such a peaceful practice, beautiful movements, how can it not be allowed, and even be persecuted? The CCP regime is really evil and autocratic to the extreme.” 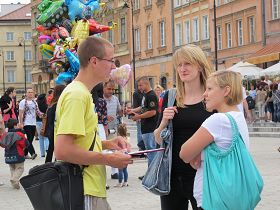 A practitioner speaks with tourists about Falun Gong

At 11:00 a.m. practitioners started doing meditation outside the Chinese Embassy. Display boards were set up, exposing the brutality of the CCP. Passersby stopped to learn more and expressed their support. 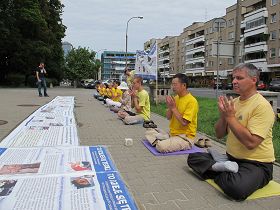 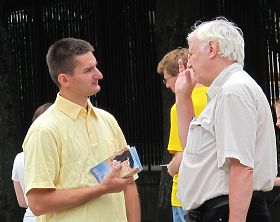 At 2:00 p.m., practitioners went to the Warsaw Old Town Square, and set up banners and display boards. They demonstrated the five exercises, at the same time. Many people who stopped to learn more raised the same question: “Is this really happening in China now?” Many people signed the petition to oppose the persecution. Many also said, “What can I do for you?” “The persecution must be stopped immediately.” 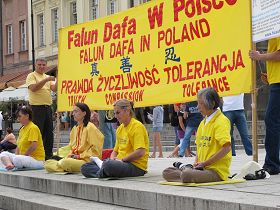 Practitioners perform the exercise at the Old Town Square in Warsaw 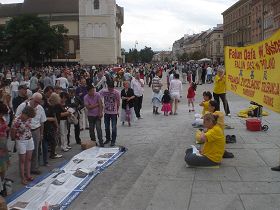 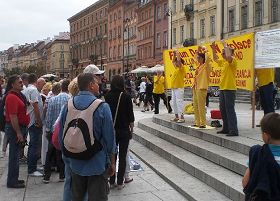 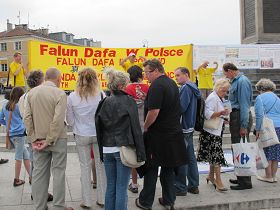 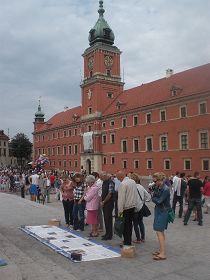 An 85-year-old woman viewed the displays, and came over to sign the petition. She said, “I support Falun Gong. The law of Heaven will not tolerate the CCP's persecution; the CCP will perish. You must hold on.”

A man who had come from Malaysia to Poland, said, “Communist autocratic rule is itself an evil. People of Malaysia have a deep understanding of it. I'll sign the petition to support you, I wish you success. I will learn more about Falun Gong. Your spirit is really admirable!” 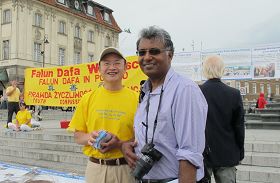 Two Chinese from China viewed the display boards for a long time. A practitioner explained to them about the staged Tiananmen Self-immolation and answered many other questions they raised. After the two Chinese were clear about the facts, they announced their resignation from the CCP and its affiliated organizations.

Two other Chinese said that they were not quite clear about the facts about Falun Gong, but if something that the Communist Party says is not good, it is probably actually good, because they don't trust the Communist Party. They asked a practitioner if Falun Gong forbids people to take medicine when they are ill. The practitioner explained to them patiently that was not true, and told them how the CCP fabricates lies to slander Falun Gong. The two people seemed to be awakened, and announced their resignation from the CCP organizations. They repeatedly thanked practitioners before leaving. 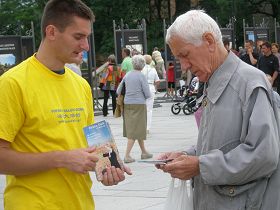 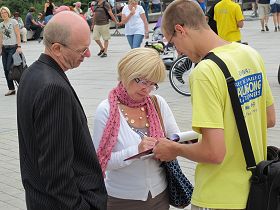 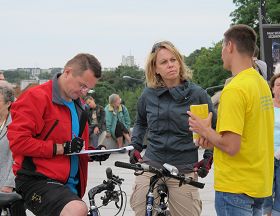 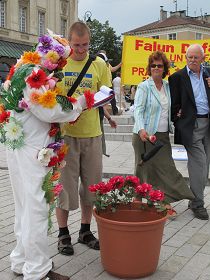 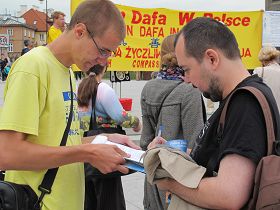 At 6:00 p.m. nearly 200 people had signed the petition to support Falun Gong. Many Chinese people who learned the facts about Falun Gong in Old Town happily announced their resignation from the CCP and its affiliated organizations.