(Clearwisdom.net) On July 20, 1999, the brutal persecution of Falun Gong in China was launched by the Chinese Communist Party (CCP). On July 16, 2011, Falun Gong practitioners in Brisbane, Australia, staged a rally in the central plaza of the city, calling for an end to the persecution that began 12 years ago and the dismantling of the CCP. 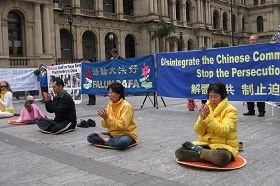 The light drizzle didn't keep passersby from stopping and learning more about Falun Gong and the persecution in China. Many signed their names on the petition to express their support for ending the persecution, and some stayed to learn the exercises.

One practitioner said she collected over one hundred signatures in just a few hours. One of those who signed was a woman from Fiji who was touring Australia with her daughter. “Coming from a small island, Fiji, this is the first time I've heard about (the persecution)” she said. “It is absolutely barbaric. I am very sympathetic to those being suppressed and I support Falun Gong's efforts.”