(Clearwisdom.net) On July 19 and 20, 2011, the International Truth-Compassion-Forbearance Art Exhibition was held in the John A. Wilson Building, the office of the Mayor of the District of Columbia, Capital of the United States. City government officials, staff and human rights workers, as well as people involved in the arts circle viewed the exhibition.

Michael Anderson, who works in the Department of Justice, said he felt that the persecution of Falun Gong in China was horrible and almost too brutal to be expressed. He could not understand how someone could brutally torture another. 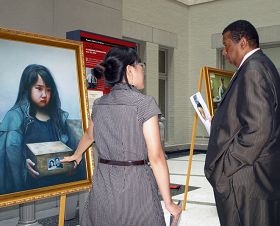 Russell Campbell, Chair of the Commission of Human Rights, Montgomery County, Maryland, made a special trip to Washington to view the exhibition. He said that exposure of the persecution needs to be ongoing. He believes that as a country, we cannot ignore those who are persecuted for their belief. Mr. Campbell said that he would write to the federal government to call for their support. He added that this persecution must stop immediately. 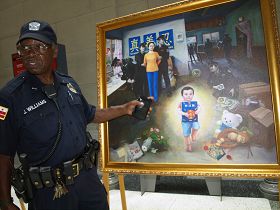 District of Columbia police officer John Williams understood the persecution after viewing the painting Ransacking. He said that the practitioners were deprived of their personal dignity and the armed police were inhumane. He noticed that the police in the painting also took the opportunity to take valuables from the practitioner's home. 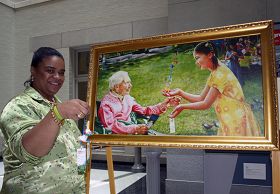 Dorinda, a staff member in the DC Mayor's office, views a painting

Dorinda, who used to work in Congress and now works in the DC Mayor's office, was touched by the painting Pure Call. She said the girl in the painting caught her attention and the painting had a lot of meaning. 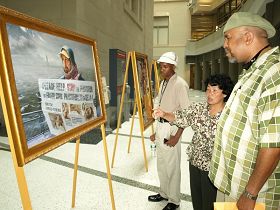 Michael Anderson (on the right) stood for a long time in front of the painting Forbearance, which depicts a practitioner standing on the street in Manhattan in a heavy snow to express his support for fellow practitioners being persecuted in China 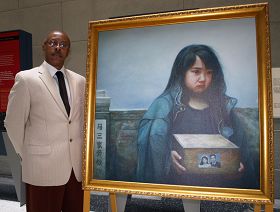 Alimayu Oding, a minister, was moved by the painting Orphan's Tears

Several Falun Gong practitioners who suffered from the persecution in China also came to the exhibition. The painting Ransacking reminded practitioner Ma Chunmei of her experiences of the persecution. When the police ransacked her home, her son was 7 years old. She was forcibly taken away four times for appealing for justice in Beijing. She was imprisoned in labor camps twice, for a total of more than four years. She suffered from various tortures including injection with toxic drugs. The police forced her to divorce her husband.

Practitioner Yu Zhenjie from Heilongjiang Province said, while pointing at a painting showing the CCP's torture methods, that she also suffered that kind of torture. Sixty-year-old Ms. Yu was arrested and imprisoned several time for practicing Falun Gong. She said, “During my imprisonment, the prison guards shocked and burned my face, neck and body with electric batons. They force-fed me and knocked out my teeth during the brutal forced-feeding. I was hung from the ceiling until I fainted. Later they injected toxic drugs into me.”

Ms. Yu's brother and sister-in-law were sentenced to 13 and 11 years in prison, respectively. They are still imprisoned. Ms. Yu called on the American Government to rescue her relatives in China.

“Hong Kong: Falun Gong Practitioners Hold a Candlelight Vigil to Call for an End to the Persecution (Photo)”