(Clearwisdom.net) At 2 p.m. on July 20, 2011, Falun Gong practitioners gathered in the busiest area of the Swedish capital of Stockholm – Mynttorget Square next to the Royal Palace – to expose the Chinese Communist Party's (CCP) atrocities in the persecution of Falun Gong in China. They sought help from people from all walks of life to bring the brutal persecution to an immediate end. 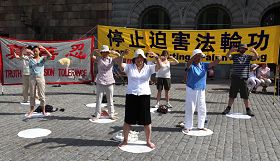 At the event, tourists from around the world gathered to study a variety of displays that exposed the CCP’s crimes, as well as Falun Gong practitioners’ demonstration of the five peaceful exercises. Western practitioner Dan talked to passersby in English about Falun Gong and the brutal persecution in China.

Many tourists in the crowd were from China. Some studied the information panels carefully and listened earnestly to practitioners explaining the facts. Two elderly gentlemen from Taiwan gave practitioners a thumbs-up and said, "We will always support you!" 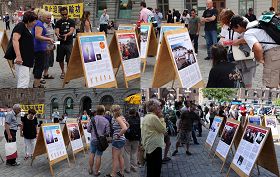 Swedish practitioner Biggita and her sister Sussana came from another city by train to attend the rally. The sisters talked to passersby about Falun Gong and the persecution. One of the sisters said, "The senseless persecution has lasted for 12 years. It must immediately stop! Right now Falun Dafa has spread to more than one hundred countries all over the world. The CCP's lies are untenable. We will not stop spreading the facts until the persecution stops."

People expressed their sorrow and indignation at the brutal persecution in China. They signed the petition to condemn the CCP’s brutalities. Many were interested in the gentle and peaceful exercises, and planned to learn more about Falun Gong on the Internet.

That morning, the practitioners also held a protest rally in front of the Chinese Embassy in Stockholm to condemn the CCP's brutal persecution of Falun Gong, calling on all righteous people to stop the CCP’s atrocities together. 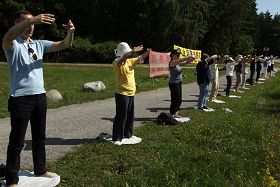 Practicing Falun Gong in front of the Chinese Embassy

In front of the embassy, Falun Gong practitioners held banners that read, "Stop Persecuting Falun Gong" and "Truthfulness-Compassion-Forbearance." Some demonstrated the exercises, while others talked about Falun Gong to passersby and told about the persecution of Falun Gong in China. Practitioners also called for the embassy staff to learn the facts, quit the CCP as soon as possible, and refrain from aiding the CCP.

Practitioner Xiao Zheng said that the CCP has been persecuting Falun Gong for 12 years. Practitioners in Sweden gathered to support fellow practitioners persecuted in China. He urged the embassy staff not to participate in the persecution; not to extend the persecution of Falun Gong overseas; not to help the CCP monitor overseas Falun Gong practitioners; not to revoke practitioners’ passports, producing stateless refugees; and not to suppress or sabotage Shen Yun’s performances in Sweden, thereby stifling the promotion of authentic traditional Chinese culture.

Xiao Zheng said, "Whatever you do, you will be held responsible in the future. No matter what people do, they have to take responsibility for themselves. I hope you will take home the facts about Falun Gong. If anyone has been involved in the persecution, you must immediately stop and make up for what you have done."

Many motorists passing by the event slowed down. Some rolled down their windows to inquire and ask for informational materials. Some gave practitioners the thumbs-up or honked to show their support.

A mother and daughter passing by the embassy stopped to listen to practitioners explain the truth. The mother said, “You are right in coming here to protest. Such disregard for human rights cannot be tolerated.”

“Italy: Continuing to Spread the Facts on the 12th Anniversary of Protesting the Persecution of Falun Gong (Photos)”