(Clearwisdom.net) On the evening of June 20, 2011, Mr. David Matas, well-known Canadian human rights lawyer, arrived in Sydney to participate in the book launching ceremony for the Chinese version of his book, Bloody Harvest, co-authored by Mr. Matas and Mr. David Kilgour. The ceremony was held at Tianti Bookstore in Sydney, Australia. 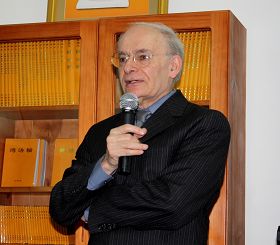 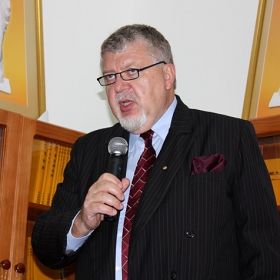 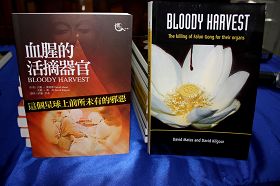 Bloody Harvest in Chinese and English

Since July 20, 1999, the Chinese Communist Party (CCP) has conducted a brutal persecution of Falun Gong. Over the past eleven years of persecution, many Falun Gong practitioners in China have been unlawfully detained, imprisoned, and sent to brainwashing centers or forced labor camps, where they suffered inhumane torture. The CCP even harvests vital organs from living Falun Gong practitioners for profit in organ transplantation surgeries.

After conducting a detailed investigation, in July 2006, Mr. Matas and Mr. Kilgour released their Report into Allegations of Organ Harvesting of Falun Gong Practitioners in China. Later they published the book, Bloody Harvest, an updated report into the allegations.

Mr. Matas pointed out that organ transplantation is an important financial resource for the CCP's medical system. The waiting time for organ transplantation is only a few days in China, but several months to several years in other countries. As Chinese people are generally unwilling to be voluntary organ donors, death row inmates have been widely used as a source of organs. However, there is a big difference between the number of Chinese death row inmates and the number of organ transplants taking place in China. This means that there is a large bank of donors supplying organs and people are being killed for the needs of patients. Through extensive research, documented in their reports, Matas and Kilgour came to the conclusion that the organs are not from willing donors, but from incarcerated Falun Gong practitioners (the largest group of prisoners of conscience in China).

The evidence in their investigation report caught the attention of the United Nations Human Rights Commission, which requested that the CCP explain the big discrepancy between the numbers of death row inmates and organ transplants.

“When they do disappear, it’s often very sudden and unpredictable. What we see with these repressions is the regimes that are very brittle, you keep on pressing them and then they disintegrate all of a sudden. So my view is that what’s going to happen with China and that’s what’s going to happen with the persecution of the Falun Gong. My belief is to keep on pressing, get enough information out and get enough people involved, eventually it will disappear.”

Dr. Sev Oz Ozdowski, professor at the University of Western Sydney and former chairman of the Australia Human Rights Committee, participated in the book launching ceremony. He said that the CCP regime is carrying out the persecution of Falun Gong using the resources of the nation's entire political system. He said that it is the worst persecution in history. The release of the Chinese version of the book Bloody Harvest will help Chinese people learn more about the persecution of Falun Gong and the CCP’s infringement of human rights.