(Clearwisdom.net) Vancouver practitioners were invited to participate in the Hyack Festival Parade in New Westminster, British Columbia on May 28, 2011. As the only participating Chinese group, the practitioners were warmly welcomed and received strong applause along the parade route. 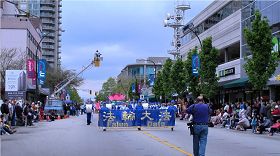 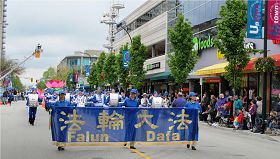 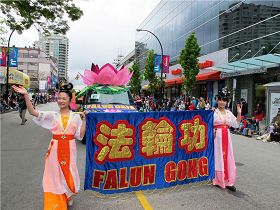 The practitioners presented a marching band, a decorated float, heavenly beauties, and a waist drum team. Many Chinese immigrant families were among those watching the parade.

A mother and daughter from Beijing were excited to see the Falun Gong procession. The daughter immigrated to Canada four years ago and the mother came to Vancouver recently to visit. They commented that they didn't understand why the Chinese Communist regime persecutes Falun Gong.

The mother said, “I have a good friend who practices Falun Dafa and she was imprisoned for two years. I know practitioners are all good people while the Communist Party is very corrupt. People in China all look down on the Party.”

A family from Shendong was also pleased to see Falun Gong. The father said that there were many practitioners in his hometown. “The Falun Gong procession is good. People have freedom of religion in Canada.”

The parade started in 1972, and draws over 100 groups to participate annually. Some groups from the western US have also participated in the parade.

“Removing the Hidden Attachment of the Fear of Loneliness”