(Clearwisdom.net) Sydney practitioners were invited to the annual grand parade in Blacktown on the morning of May 28, 2011. As the first presenting group, the practitioners' Divine Land Marching Band led the parade. This is the tenth consecutive year that practitioners have participated. 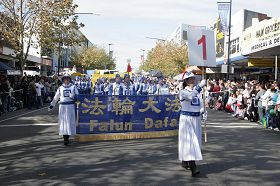 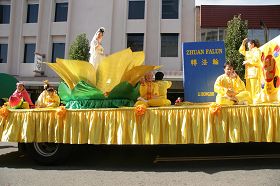 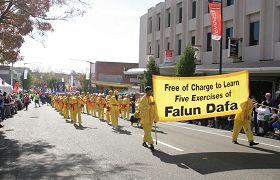 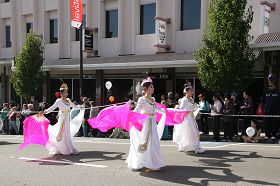 As the practitioners' marching band passes by the main stage, the announcer introduced them, "The parade group is coming. Leading the parade is the marching band of Falun Dafa. Falun Dafa is a traditional Chinese cultivation method of mind and body. It has five sets of exercises, which are slow, relaxed, and easy to learn. Practitioners offer free exercise instruction. There are over 100 million people in over 100 countries who are doing this practice. Let’s welcome Falun Gong’s marching band."

Behind the marching band, came a decorated float which displayed a giant book model of Zhuan Falun and blossoming golden flowers. Several practitioners in yellow suits demonstrated the exercises on the float. Three celestial beauties danced behind the float, and they were followed by the practitioners’ waist drum team.

Practitioner Mr. Zhuo is a Blacktown resident, and he said that practitioners have been clarifying the truth to local people for years. They have participated in many city parades, and offered information booths to introduce Falun Dafa. As the result of this persistent effort, some city employees have a clear understanding of Falun Dafa and the persecution in China.

Zhuo said, “This afternoon, the Mayor and his wife came to our booth and told me, ‘I saw you were playing a trumpet in the marching band. Your band was a wonderful lead for the parade.’”

Zhuo added, “In the past, our activities experienced a lot of interference from the Chinese communist regime. As more and more people learn the nature of the regime, it can do little harm.”

“Miraculous Recovery of a Paralyzed Patient”