(Clearwisdom.net) On the morning May 13, 2011, Falun Gong practitioners in Poland held an activity on the square in front of the underground station in central Warsaw, wishing Master Li Hongzhi a happy 60th birthday and celebrating World Falun Dafa Day. 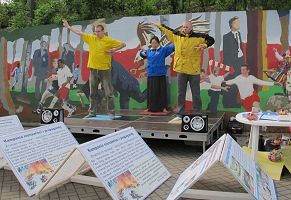 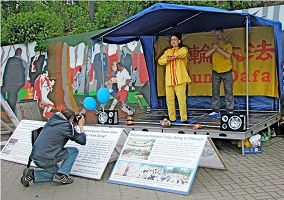 The practitioners set up display panels with spectacular scenes of Falun Dafa practitioners doing the exercises in China before the persecution began, and illustrations of the five Falun Gong exercises. They also demonstrated the exercises to the peaceful music. In the booth were copies of the book Zhuan Falun in Polish; paper lotus flowers, symbolizing the noble character of cultivators; and yellow and blue balloons worded “Falun Dafa Is Good.”

Although it was a Friday morning rush hour, Falun Gong’s display panels and exercise demonstration attracted one person after another to stop and take photos. People were eager for Falun Dafa truth clarification brochures and read them carefully. After work, many Polish people came to the booth again for more information. They were shocked and could not understand why Falun Gong practitioners are cruelly being persecuted in China. Hundreds signed the petition strongly condemning the persecution of Falun Gong by the Chinese Communist Party (CCP). 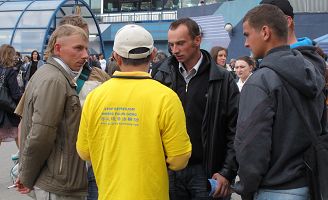 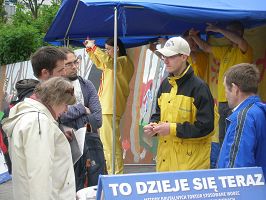 A practitioner clarifying the facts to passersby

After hearing how the CCP persecutes Falun Gong, a young girl raised one of her hands and covered her forehead and even her eyes, “This is so evil. The Chinese Communist Party is such an evil thing. I am lucky that there is no communist party now in Poland and that we have the freedom to learn the facts about Falun Gong.”

Standing in front of the panels, an older lady studied the photos of Falun Gong practitioners being tortured. Holding her face in her hands, she looked at the practitioners on the stage and again at the photos disclosing the horror of the persecution. She could not understand the relationship between them: Why were people who have benefited both physically and mentally and whose morality has been improved being cruelly persecuted? Seeing this, a practitioner gave her a booklet entitled Nine Commentaries on the Communist Party and said that she could find the answer by reading it. 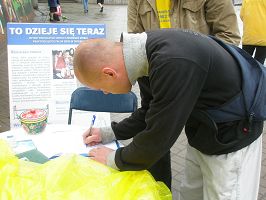 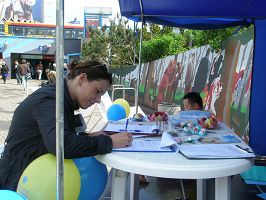 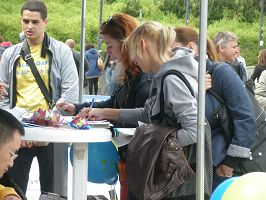