(Clearwisdom.net) On May 15, the 2011 Australia Falun Dafa Cultivation Experience Sharing Conference was held at Enmore Theatre in Sydney. More than 1000 practitioners from Australia attended the conference. Twenty eight practitioners shared their experiences in validating the Fa, saving sentient beings, and cultivating xinxing level. 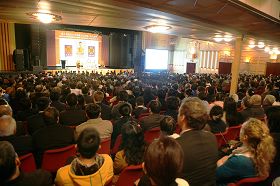 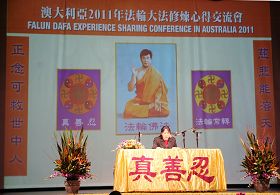 The speakers ranged from 6 to 89 years old. The older lady made the decision a few years ago that she would collect ten thousand signatures in support of ending the persecution before Master Li's 60th birthday, as a birthday gift to him. “I go out to collect signatures almost every day, even in the hot summer. My family members said I got so tanned,” she said. The 6-year old practitioner said that she started listening to the Fa when she was a newborn. “Studying the Fa makes me smart and pretty,” she said. She described how she clarifies the truth of Falun Gong to her grandmother, aunt, and cousin, and convinced them to quit the Chinese Communist party and the associated organizations.

Several practitioners from Melbourne and Sydney shared their experiences of how to convince Chinese people to quit the CCP. A practitioner from Sydney said, “At the beginning, I didn't know how to talk to people. They were always against me. I searched within and tried my best improve my xinxing. As my thoughts became more pure, I was able to convince more and more people. I clarify the truth in my daily life. I do it whenever and wherever I get a chance. It has become a part of my life now.”

Several practitioners talked about how they cultivate themselves during the media work. They shared how they collaborate with other fellow practitioners, and how they adjusted their minds when they needed to be coordinators and matured in cultivation and media work. One practitioner described how he and other practitioners worked together, overcame the difficulties, and eliminated selfishness, so that the media they run could break through a financial crisis.

Practitioners also shared their experiences of promoting Shen Yun shows. One practitioner said, “When I encountered difficulties, I didn't actively communicate with fellow practitioners, and failed to get everyone involved as a whole body. I realized that there was no shortcut in cultivation. Being a coordinator doesn't mean I have more power. It means that I have more responsibilities. Facing difficulties and criticisms, it is easy to avoid conflict. But that is not cultivation. To cultivate, I must take my responsibilities and take other practitioners' criticisms.”

A practitioner from Melbourne, who obtained the Fa in 1996, shared how she went through a sickness test. She said, “Belief in Master is the key. I check my behaviors at every moment using the Fa as a reference. I searched within and denied the old force's arrangement. In that month, I had the test of my belief in Master at every moment.”

One practitioner described how she started practicing. She had been a long-time reader of The Epoch Times. In April 2010, she saw an announcement of a health seminar on The Epoch Times. She went to the seminar, in which the speaker recommended the Shen Yun show to the audience. She bought two of the most expensive tickets and watched the show in Brisbane in June 2010. She said, “I cried from the beginning to the end of the show. I was so excited and felt so lucky. When I saw the persecution scenes, I was deeply touched by practitioners' spirits, and I decided to cultivate Falun Gong.”

Another new practitioner, who obtained the Fa in May 2009, shared her experience of memorizing Zhuan Falun. She found the book in a local library, and started cultivating. Soon after that, she decided to memorize the Fa. She said, “I've benefited a lot from memorizing the Fa, which has accelerated my cultivation.” Under the guide of the Fa, she overcame the difficulties in her family and social life. She has been doing very well in sending forth righteous thoughts and clarifying the truth.

The experience sharing ended at 4:45 in the afternoon. The organizers showed the movie Eternal Poem, which encouraged practitioners to do three things better and help Master to validate the Fa and save more sentient beings.

The conference concluded successfully at 5:00.