(Clearwisdom.net) Practitioners in Malaysia held an activity on May 7, 2011, in Taman Tasik Titiwangsa, a famous resort in the capital Kuala Lumpur. They celebrated the 12th World Falun Dafa Day, also the 60th anniversary of Master Li Hongzhi's Birthday and the 19th anniversary of Falun Dafa's first public introduction. The grand celebration drew the attention of people of many different nationalities.

I have met what I wanted today!

Abdul Rahim Awang, a Malay businessman, lives in Bangi, Selangor. When practitioners arrived in Taman Tasik Titiwangsa, he followed them and started to learn to do the Falun Gong exercises. 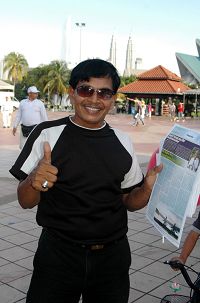 Abdul Rahim Awang: I have never see such a good practice as Falun Dafa; it's the best practice!

He was excited and said, “I'm honored, pleased, and lucky to meet Falun Dafa, because I obtain Truthfulness-Compassion-Forbearance. I've met what I wanted today.”

“It's the best practice for me. I've lived for 50 years, but I've never seen such a good practice as Falun Dafa!” Mr. Awang repeatedly thanked practitioners. He said that he strongly supports Falun Dafa and will introduce it to his friends. “I hope the practice will help people in Malaysia to be healthy. It's a healthy practice!”

Seeing photos on display boards depicting the persecution of Falun Gong practitioners, he said, “These photos make me sad. Children, adults, and young people—they were all killed. Why? ” 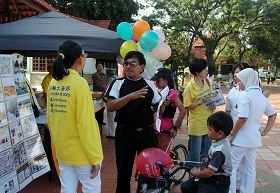 Seeing the message on a display board, “Good will be rewarded, evil will meet with retribution,” he said, “It's an eternal heavenly principle; it's precisely true.”

Mr. Awang said, “Heaven has bestowed upon me this lucky day. I thank all practitioners and hope you keep up your efforts in your practice. It's the best practice I've ever seen in the entire world, because everybody, the old, the young, can learn to practice it.” He said, “I sincerely congratulate you on World Falun Dafa Day.”