Whereas, Falun Dafa is an ancient Qigong practice rooted in traditional culture. Since its first Introduction to the public in 1992, Falun Dafa has helped millions of people in the world to improve their health, purify their minds, uplift their spirits, and reach a state of harmony in their lives – leading people to a happier and more meaningful life; and,

Whereas, the practice of Falun Dafa is based on the principles of “Truthfulness-Compassion-Tolerance.” It has five sets of gentle exercise and meditation. The movements are simple, slow, and smooth. It is good for people of all ages and backgrounds; and,

Whereas, the persecution of Falun Gong, the most horrendous persecution against millions of innocent practitioners in China, has been on-going for 12 years. In this darkest decade in Chinese civilization, the Chinese Communist regime campaigned to persecute, intimidate, imprison, and torture practitioners with means that are unheard of in human history. The live organ harvesting, reported and substantiated by international community, further attests to the evil nature of the persecution. Last year, U. S. House of Representatives passed HR 605 which calls for an immediate end to the persecution of Falun Gong in China; and,

Whereas, Falun Gong practitioners are a group of citizens who are active participants in our community: doctors, lawyers, professors, engineers, entrepreneurs, home makers, and students; and

Now, Therefore, We, the members of the Atlanta City Council, and on behalf of the citizens of Atlanta, hereby proclaim this 13th day of May 2011 as World Falun Dafa Day in the City of Atlanta 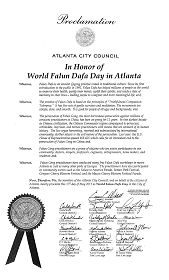