Sydney, Australia: Support for the 90 Million Chinese Who Have Quit the Communist Party's Organizations (Photos)

(Clearwisdom.net) On March 13, 2011, volunteers of the Global Service Center for Quitting the Chinese Communist Party (CCP) set up a table and put up banners on a street in Chinatown to tell passersby the facts of the persecution of Falun Gong and that over 90 million Chinese people have quit the CCP and its affiliated organizations. Many stopped to read the posters and displays. After learning the facts, many of them signed the petition to support the movement of quitting the CCP. 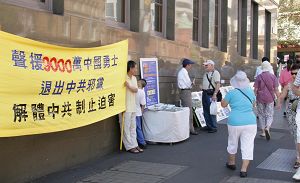 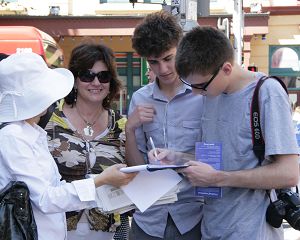 A young man from northern China signed the petition and said with anger, “The CCP has been infiltrating overseas. I heard that it is planning to open Confucius Schools overseas and hire teachers from China. In these schools they are not allowed to talk about sensitive issues such as Taiwan and Falun Gong. I came overseas to avoid the CCP and pursue freedom and democracy. Everyone knows how corrupt and evil the Chinese regime is and how it persecutes its people and eliminates dissidents. We should expose its evil deeds to the Australian government.”

According to Zeng Lin, a volunteer with the Service Center, every day 40 to 60 thousand people quit the CCP and its affiliated organizations. “This means many people know that the CCP will collapse soon and are unwilling to go down with it,” said Zeng. “Many people have asked their relatives and friends to quit too.”

Falun Gong practitioner Ms. Wang and her husband run a restaurant. She goes to tourist sites every weekend to tell tourists from China about the persecution of Falun Gong and help them quit the CCP. Her husband was initially against what she does because he believed the CCP’s slanderous propaganda against Falun Gong. After witnessing Ms. Wang’s physical and mental improvements, he began to support Falun Gong and the work Ms. Wang does. Every weekend he works harder to pick up the workload in the restaurant so that Ms. Wang can go out to clarify the truth.

An Australian man in his 50s suggested to the volunteers, “You should go directly to the Australian government and make this activity well-known. You should put all the information on the Internet and newspapers to expose the CCP’s evil deeds.”

“Toronto: “I Hope That We Will See Them Here Every Year” (Photos)”