(Clearwisdom.net) On the invitation of the Morris County St. Patrick's Day Parade Committee in New Jersey, the New York Divine Land Marching Band, composed of Falun Gong practitioners from the greater New York area, once again participated in this annual large-scale parade. The band was impressive and well-received among the 121 parade entries.

The parade in Morristown on March 12, 2011 drew nearly 80,000 people from around Morris County. Just as William Quinn, chief director of the parade committee, described, many people felt it was like taking part in a big family get-together. Along the 1.5-mile parade route, spectators were bathed in early spring sunshine while enthusiastically greeting the parade participants. 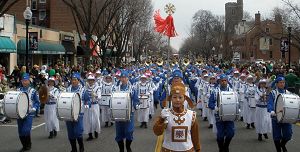 The Divine Land Marching Band, mainly composed of Chinese, once again made its appearance in this grand parade. Its unique Chinese Tang Dynasty-style uniforms, its scale and its discipline, especially its special music, earned warm applause along the parade route.

When the band passed by the town's central park, the organizating committee told the spectators, “Falun Gong is a cultivation practice based on Truth-Compassion-Forbearance, and it has five sets of exercises. Falun Gong has spread to more than 100 countries.”

“They are really fantastic!” William Quinn said after the parade concluded. He said it was like a family gathering, “We invite them every year, and I know they are everywhere around the world.”

Mr. Liang, who is in charge of the New York Divine Land Marching Band, said, “It's the sixth year that we have been invited to participate in this parade. Falun Gong practitioners want to display the wonderfulness of Falun Dafa to people.”

“Sydney, Australia: Support for the 90 Million Chinese Who Have Quit the Communist Party's Organizations (Photos)”