Toronto: “I Hope That We Will See Them Here Every Year” (Photos)

(Clearwisdom.net) On March 13, the Divine Land Marching Band participated in the 24th Toronto St. Patrick's Day parade. This was their fifth time that the band, comprised entirely of local Falun Dafa practitioners, has performed in this parade. 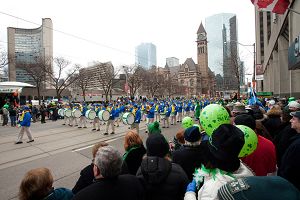 Kathleen Keenan, one of the organizers of the parade, said that the Band is invited to the parade every year. She said that their performances are the best and their costumes are beautiful so they are very welcome. “I see that people came out of the stores and applauded them,” Ms. Keenan said, “We are grateful for their performance, and we will invite them in the future.” 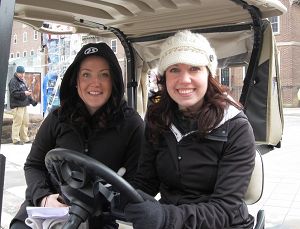 Kathleen Keenan, one of the organizers of the parade (right)

Brian, a local citizen, expressed his delight in seeing the Divine Land Marching Band. He said that he has seen the band in this parade for many years, and he hopes that he will see them here every year. His wife said that her whole family likes the band. 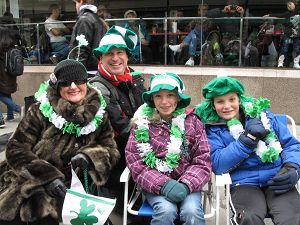 Brian and his family

Cathy and Merry never saw the performance of the Divine Land Marching Band before. They asked people where the band was from. When they learned that it is a local band, they were excited. “We will come next year, and hope to see them again,” they said. 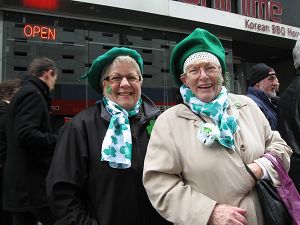 Tomako and her husband Shingo watched the parade with their kid. Tomake said: “We just moved to Toronto from Japan six months ago. This is our first time seeing this band. We like it. We are happy to see them.” 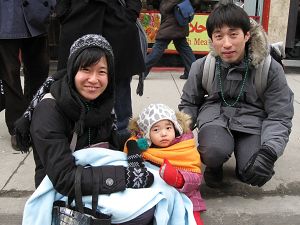 Several Chinese people also said that they were excited to see such a big Chinese band in the St. Patrick's Day parade. They liked the performances and were proud of them. Mr. Liu, a Chinese student, said: “I am touched to see such a big band in this free land. I want to learn more about Falun Gong on the Internet.” Ms. Li, a visitor from Henan province, agreed with him.

“Sydney, Australia: Support for the 90 Million Chinese Who Have Quit the Communist Party's Organizations (Photos)”