The following are experiences shared by practitioners in Taiwan who call China. 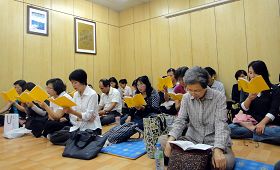 Practitioners from northern Taiwan study the teachings and share how to clarify the facts of the persecution to the Chinese people via telephone.

Every Phone Call Offers Hope for a Being to be Saved

Ms. Liao has been calling the government offices for the past few years to tell them about the CCP’s lies and propaganda to defame Falun Gong. She does so to help rescue the practitioners who are imprisoned there. She also follows the latest persecution reports on the Minghui website (Chinese version of Clearwisdom.net) and calls the police to ask them to stop committing crimes against the arrested practitioners.

Head of a Police Station: It Will Never Happen Again

When Ms. Liao talked to the chief of a local police department, she learned that the fines were exempted and the two practitioners released. Those who participated in the persecution received many phone calls from practitioners. The police chief and his wife eventually turned their phones off.

Ms. Liao gave another example. Agents from the 610 Office once arrested a practitioner and took her daughter's money. Her daughter’s family lost financial support immediately. Other local practitioners who went to the authorities to ask for the practitioner’s release were also arrested and detained.

The case was later transferred to the city. Taiwan practitioners called the city 610 Office and the city's police department. After several intensive rounds of phone calls, some phone numbers became unavailable and some officers/agents began using abusive languages during the calls. “We just did what we should do and were not moved by anything,” said Ms. Liao. Later Ms. Liao read on the Minghui website that the three detained practitioners had been released.

A practitioner in China was illegally sentenced to four years in prison. Ms. Liao often called the practitioner’s family. His daughter began to read the Falun Dafa books and became a practitioner. His parents, wife, and brother also gradually became practitioners after they learned the truth from a DVD. The family even got a police officer to begin practicing Falun Dafa during the process of clarifying the facts of the practice.

After Many Hangs-Ups, the Person Finally Agrees to Listen

Ms. Lin is a teacher. She came to realize the power of compassion through making phone calls. A phone number she was about to call had a note beside it, “scolded,” meaning that a practitioner who had dialed the number was scolded. Ms. Lin called the number and the person hung up on her. She told herself not to be restricted by her notions and fear, and not to be affected by the note.

Ms.Lin continued calling and was hung-up on several times. She didn't give up however, thinking that each time she called, she could make a small point clear and save the person a bit more. After a few more times, the other person began to speak more gently and was willing to listen to her.

Sore Throat Doesn't Stop the Truth From Being Told

One time Ms. Lin’s throat was sore. She persisted in calling and spoke with a hoarse voice. She asked the person on the phone to quit the CCP and its affiliated organizations, and when the other person agreed to quit, Ms. Lin lost her voice.

She realized that she had not finished everything she wanted to say, so she tried with all the energy she had to speak. She could not even hear her own voice but she continued speaking. In the end, she asked the other person whether he understood. The person was still on the phone and said, “I knew it all.” Ms. Lin’s tears ran down her face at that moment.

“Hawaii: Falun Gong Practitioners Call for the End to the Persecution at APEC Summit (Photos)”