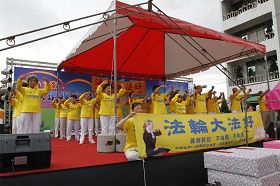 The practitioners began their exercise demonstration at 4:10 p.m., as the prelude to the event. A practitioner introduced Falun Gong's wide spread around the world and the practice's principles. Some spectators followed the practitioners on the stage to do the exercise. Several practitioners also walked among the crowd, sharing with people their personal cultivation experiences and the benefits they have received from the practice. They handed out informational materials to those who showed interest in Falun Gong. Many people were concerned about the persecution of the practice in China.

After the exercise demonstration, the host announced times and locations for people to learn Falun Gong free of charge, and welcomed them to come and experience the physical and mental well-being that results from practicing Falun Gong. The Lujhu Township mayor went onstage to show support for the practitioners and had a photo taken with them.

“Mr. Ma Zhiwu, Tortured for Years in Detention, Has Been Arrested Again (Illustration)”