Mr. Ma Zhiwu, Tortured for Years in Detention, Has Been Arrested Again (Illustration)

(Clearwisdom.net) Falun Gong practitioner Mr. Ma Zhiwu was illegally arrested by the State Security Division the evening of September 12, 2010 and detained for the second time.

Mr. Ma started practicing Falun Gong in May 1998. After Jiang Zemin and his followers began to persecute Falun Gong on July 20, 1999, Mr. Ma suffered ongoing persecution by the Chinese Communist Party (CCP). He was imprisoned for a total of eight years in the Yinchuan Detention Center, Ningixa Forced Labor Camp and Wuzhong Prison in Ningxia. During his detention he was tortured.

After the persecution began, Ma Zhiwu went to Beijing to appeal for justice for Falun Gong in 1999. He was detained at the Yinchuan Detention Center after being returned to Ningchuan City. He was sentenced to a 3-year prison term and held at Baitugangzi Forced Labor Camp in Linwu City. The following is an account of the torture that Mr. Ma endured in detention.

In the forced labor camp, guards gave the green light to drug addicts and thieves to beat Mr. Ma without cause. They beat Mr. Ma with batons, stools and rubber tubes, all over his body. To protest this illegal abuse, Mr. Ma went on a hunger strike in August 2000, demanding that he be released immediately. He was force-fed by guards Guo Wenzhi and Chen Mingyuan, a prison doctor, and about eight inmates. They grabbed his arms and held his head while some inserted the rubber feeding tube into his nose. Several people took photos or video recorded everything. They inserted and pulled out the tube through his nose repeatedly to increase the pain. Within ten days, Mr. Ma was skin and bones and his life was in danger. In August 2001, Mr. Ma went again on a hunger strike to protest his mistreatment. The guards ordered the inmates to hold him firmly, so they could insert the nasal feeding tube. Then they used a syringe and fed him a thin paste.

Mr. Ma was transferred to Lingwu Detention Center on November 12, 2001. The Lingwu Court held a hearing. The prosecutor used the hunger strike as evidence of misbehavior and refused to hear Mr. Ma's appeal. The court sentenced him to a 6-year prison term at Guanmahu Prison in Wuzhong City.

Guards Liang Haiwang and Guo Jian ordered inmates to torture Mr. Ma for more than ten days. They also held a public meeting to criticize Mr. Ma, while he had to stand in a humiliating and painful position with his body bent forward and his arms lifted high up behind him. Inmates made speeches and shouted slogans while punching and kicking him. Prison guard Liang Haiwang ordered the inmates to hang Mr. Ma from the beam in the sawmill with a leather belt used in the mill's operations. Then, they beat and shocked him with electric batons. They forced him to listen to articles that slandered Falun Gong. They constructed a wooden box on which they wrote Ma Zhiwu's name and words that slandered Falun Gong. Then they hung the box around Mr. Ma's neck and placed bricks and sandbags in the box to force him to lower his head. This torture lasted for two months.

On October 10, 2004, Guo Jian and a inmates cuffed Mr. Ma's hands behind his back. With his back facing the group they grabbed one arm and dragged him by turns for a total of several kilometers. Then they ordered inmates to drag him to the cornfield and leave him there. In the evening they dragged Mr. Ma back and handcuffed him to two beds. His arms were swollen when they removed the handcuffs. 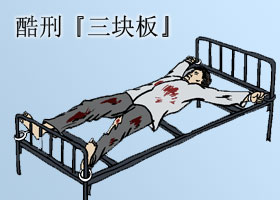 Illustration of the "dead person's bed"

Mr. Ma Zhiwu was shackled to a "dead person's bed" for more than 40 days. His arms and legs were stretched out and his hands and ankles were tightly handcuffed to the four corners of a bed frame. This torture was extremely painful; his ankles were injured and he bled profusely. The inmates prohibited Mr. Ma from sleeping. They read articles to him that slandered Falun Gong. Whenever he closed his eyes they beat him with fire tongs and wooden batons. In addition, they force-fed him with a salty paste daily. Every bite made Mr. Ma choke. November was extremely cold, and they didn't give him a blanket. He was frozen stiff and couldn't move. They also didn't allow him to use the restroom.

One day, the inmates drilled holes in the corners of the cell where the "dead person's bed" was and installed 4 iron rings. Then they handcuffed Mr. Ma with two pairs of handcuffs to the rings. At the time, Mr. Ma was skin and bones and his hands were deformed. He was extremely weak and could not stand up. Every move was extremely painful. After several hours he was perspiring, his ears were ringing, he felt dizzy and then he lost consciousness. When forced-feeding Mr. Ma, the guards put unknown drugs into the salty paste which was cooked with dirty water. There were also flies in the paste. After the forced-feeding Mr. Ma felt as if his body was burning.

Mr. Ma was unable to stand and walk for six months after this round of torture. Whenever he needed to go to the restroom or anywhere else, inmates had to carry him on a wooden plank.

On another occasion, about seven inmates beat Mr. Ma until he was black and blue. He had blood in his urine, was unable to straighten his back, sleep or sit up. The inmates poured cold water over him and dragged him by his arms with his back against the ground.

“Walk the Bright Path of Having a Healthy Body”