(Clearwisdom.net) On September 19, 2010, Falun Gong Practitioners were invited to take part in the International Culture & Leisure in Holland Fair annually held by the Hague City government. The fair was held in the Hague City Hall. Over 100 groups, including culture and leisure organizations as well as health and sports clubs, were represented at the fair, and it is estimated that there were several thousand visitors. Falun Gong practitioners were invited to demonstrate the Falun Gong exercises. They also distributed Falun Gong truth-clarification materials and paper lotus flowers attached to bookmarks with the words "Falun Dafa is great." People commented on the beauty of the folded paper lotus flowers. 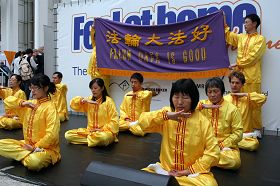 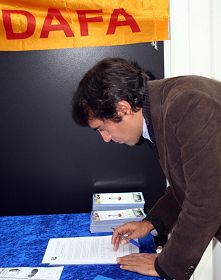 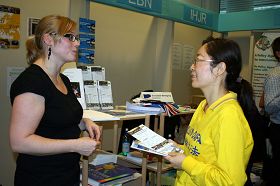 Just after the practitioners arrived, a person who works at a bank came to visit. When he learned that Falun Gong is able to make people relaxed and relieve pressure, he said that he felt that this was what he was looking for. He took some information with him and said that he would learn more about Falun Gong from the Internet.

As an international city, The Hague is the place where many international NGOs have their offices. Quite a few NGOs also attended this year's event. The Falun Gong practitioners and several NGO staff had in-depth talks during the fair. The NGO staff members all expressed sympathy to the Falun Gong practitioners who are suffering persecution in China, and showed understanding and support for the practitioners' effort against the persecution. Several staff members displayed the beautiful lotus flowers they received in their own booths at the fair.