(Clearwisdom.net) To promote good health to the people of Australia, the annual Brisbane Mind Body Spirit Festival was held from June 24 to 26 at the RNA Show Ground in Queensland. Falun Gong practitioners participated in the expo for the third year. One gentleman said, "The Falun Gong booth had unmatchable immense energy." 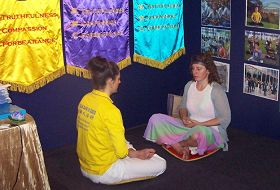 There were near one hundred booths in the expo. Many people commented that Falun Dafa was different from the others. One gentleman stood for a long time in front of the Falun Gong booth and watched the exercise demonstration. He said he had walked through the expo and felt immense energy only from the Falun Gong booth. The next day, he asked the practitioners to teach him the exercises.

Another young man in his 20s said he had never been interested in spiritual beliefs. He said he did not know why he suddenly came to the expo. While talking with a practitioner, tears ran down his face and he said emotionally, "I came for Falun Dafa!"

Besides the visitors who showed interest in the practice, others who had booths in the expo were also interested. Some came to learn the exercises when they were not busy.

The three-day-long expo had a total of 9,500 visitors this year. Many people expect to see the Falun Gong booth again next year.