(Clearwisdom.net) July 1, 2010 was the 143rd anniversary of Canada's confederation. Toronto Falun Gong practitioners were invited to participate in the parade in Cambridge, Ontario in the morning and another in Scarborough in the afternoon. The Divine Land Marching Band, the lion dance team, the waist drum team, and the float in the shape of a Fa boat were welcomed in the parades. 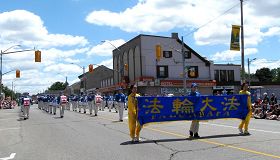 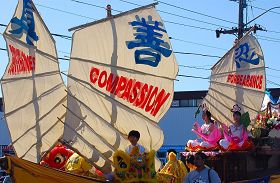 The Toronto Divine Land Marching Band participated in the Cambridge parade for the second year. 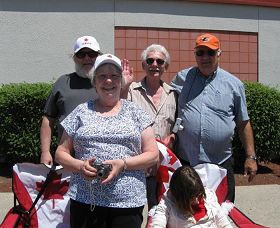 Margaret, a resident of Cambridge, expects the band every year

Margaret, a local resident of Cambridge, stood up and applauded warmly. Seeing the correspondent beside the band, she spoke as if to an old friend, "Since I saw them last year, I have been expecting them to come. They are a part of Cambridge. I like their performance, costumes, and colors.  I hope they come every year." 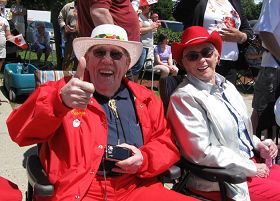 83-year-old George Robinson praised the performance of the band, giving them a thumbs up. He said he was very excited to see the band and could watch them forever. 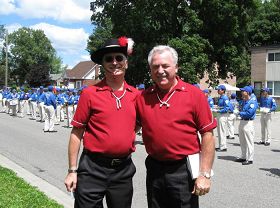 Preston Scout House Alumni Band, a well-known band in Canada, has 120 members. The band is often invited to participate in various large parades in Canada and the USA. Mr. John Hendry, one of the organizers of the band, said after watching the performance of the Divine Land Marching Band that he liked the band with blue costumes. He praised the performance. He said he could see the band in any city he went to for a parade. He had a photo taken in front of the band. 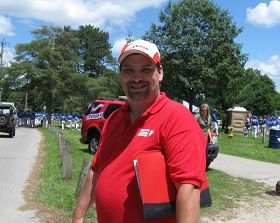 Mr. Tweine, one of the organizers of the parade, praised the band's performance.

Mr. Tweine, one of the organizers of the parade, praised the band's performance. He said he would invite the band again and hoped the band would come every year.

Many Chinese people watched the parade in Cambridge. Ms. Ding from Beijing said, "I have been here for 8 years. I heard that a Chinese band participated in the parade last year. I did not come because my second child was too young. Today I have finally seen the band. I am excited."

Ms. Zhao and her family of three from Henan were happy to see the band and waved their hands. Ms. Zhao said, "I am happy to see such a magnificent Chinese band for the first time. I feel the freedom in Canada. You cannot see this in China."

Mr. Li from Shanghai took video footage of the band performance. He said, "Very good. I see them in the parade every year."

Mr. Chen from Hong Kong was happy to take a photo of his son in front of the procession. He said, "Falun Gong has made many contributions to the community. They participate in the parade every year with more and more practitioners. I thank them very much." 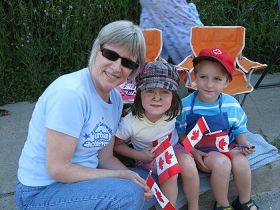 Turner, a resident of Scarborough, said, "I love Falun Dafa."

Turner, a resident of Scarborough, Ontario, taught her two children to read the banner that said: "Falun Dafa." When interviewed, she said, "You have made a good choice. I love Falun Dafa. I know Falun Gong is Falun Dafa, right? They are very kind. I know some information about them. Falun Gong is being persecuted in China. The persecution should not happen. We must stop it."

When she saw the float and the lion dancers, she said, "I love Chinese traditional culture. Falun Gong is doing well. I thank them."

"Thank you for bringing such a good gift on Canada Day" 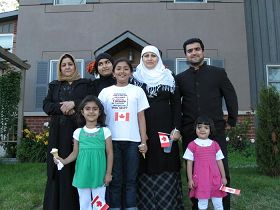 Khamid and his family watched the parade in front of their house. He said, "The Falun Dafa procession is huge and orderly. The music is great. I appreciate their bringing such a good gift on Canada Day." 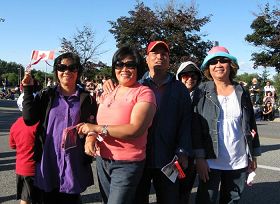 Amy from the Philippines thanks the band for the performance.

Seeing the arrival of the Divine Land Marching Band, Amy from the Philippines said, "I am very excited. Thank them very much!"