(Clearwisdom.net) The annual grand Canada Day Parade was held in Montreal on July 1, 2010, and the Divine Land Marching Band was invited to participate. With its strong lineup, the band played as the last entry in the procession and became the focus of attention. 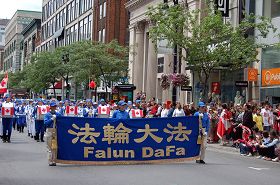 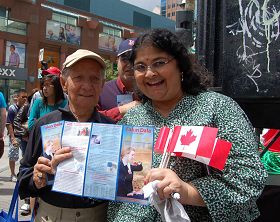 With a Falun Dafa introduction flier in hand, Mrs. Fhah said, "I know. They are the Falun Dafa Divine Land Marching Band. They believe in Truthfulness, Compassion and Forbearance."

Headed by the Royal Canadian Mounted Police, the parade moved east along Ste-Catherine street. Enthusiastic spectators got on the street and blended with the parade procession. Many people cheered and danced to the music by the Divine Land Marching Band. Dressed in new traditional style costumes, the band appeared with a fresh look. Falun Gong practitioners distributed fliers to the spectators.

A young German man asked how he could learn Falun Gong. He wanted to learn about the principles of Truthfulness, Compassion and Forbearance.

Many Chinese watched the parade this year and took pictures of the band. It was the second time Ms. Wei, an immigrant from China, had watched the Canada Day parade. She told the reporter, "The National Day parade here is filled with a holiday atmosphere. People and groups of different ethnic backgrounds can join in. It is very unique, free and happy. Falun Gong's Divine Land Marching Band is in the best order. Their performance is very professional and touching."

Mr. Zhang has watched the parade for the past five or six years. He had a very good impression of the band. He praised the multiculturalism and freedom of expression.

Mr. Li from China came to visit his family in Canada three months ago. He said the band played very well and was very lively. It was the most orderly marching among all the processions.

Mr. and Mrs. Fhah from India watched the parade. Mrs. Fhah praised the wonderful performance of the band with excitement. With a Falun Dafa flier in hand, she said, "I know. They are the Falun Dafa Divine Land Marching Band. They believe in Truthfulness, Compassion and Forbearance. It is important to follow Truthfulness, Compassion and Forbearance. Nothing should be done against these principles."