(Clearwisdom.net) The European Organ Donation Congress took place in, Cardiff, the capital of Wales, from the 24th to the 26th of September, 2010. Falun Gong practitioners came to the Cardiff City Centre to undertake a series of truth-clarification events for three consecutive days. The events demonstrated Dafa's goodness, exposed the atrocities of the Chinese Communist Party (CCP) 's persecution of Falun Gong--including the live harvesting of Falun Gong practitioners' organs for profit--and called on representatives of the European Organ Donation Congress and the people of Cardiff to pay close attention to the human rights abuses in China. Falun Gong practitioners' truth-clarification event provided local people with the opportunity to understand the truth and to issue calls for justice.

Three days of truth-clarification events allowed many local people in Cardiff to understand the truth. Passersby took the leaflets one after another; some people stopped at the stand to read the truth-clarification display boards carefully or talk with Falun Gong practitioners. People who had understood the message signed the petition books against the persecution enthusiastically to show their support for Falun Gong. They showed a clear understanding of the CCP's evil nature for using violence and lies to maintain its arbitrary power. 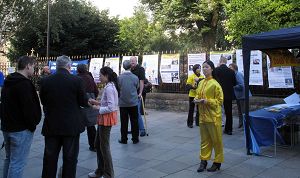 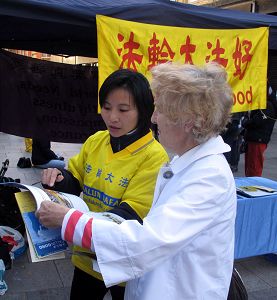 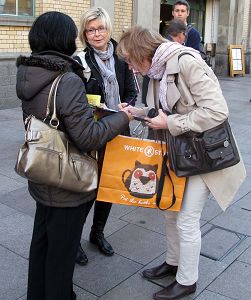 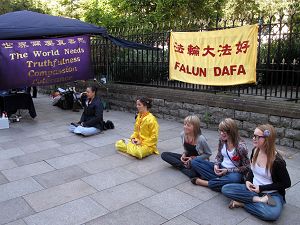 Retired Teacher: Shocked by the Evil Still Existing in China

Naomi, a retired teacher who lives in Cardiff, is a volunteer worker for a charity organisation. She wandered around in front of the truth-clarification display boards for a long time, and asked Falun Gong practitioners for further explanations. She said, "I have never heard of Falun Gong, but I heard about the organ harvesting in China. I have never heard of the story about Falun Gong. Lots of people I know, believe that such things and persecutions can happen in China. They know that the human rights status in China is very bad, and I know that many countries keep quiet for the sake of trading interest. I read some newspapers in relation to such things, and I am interested in understanding the truth further. I know such things are happening in China, but I used to have an illusion that the situation in China could be improved and be more internationalized after the 2008 Olympics. But until today I have not heard that Falun Gong has suffered persecution. So, I feel that your events are truly very good, and I have learnt a lot here from you." 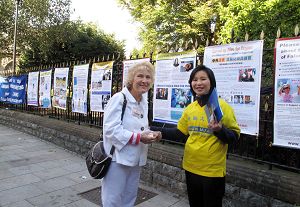 Naomi asked a Falun Gong practitioner for the details

Naomi also expressed that western people, including herself, all should cast communism aside; and as long as people saw the truth of the persecution, they would express deep concerns. She said, "During my lifetime, great changes have taken place in Europe, but people tend to forget history. Therefore, I believe that holding such events is very important. It will allow people to realize that the CCP is still doing bad things to people. I am shocked on seeing the evil still existing in China . You know, as reported by our British media, the Chinese general public lives with difficulty, and their newly-built houses could be demolished by the State, things like that."

"In this country, even all the ordinary people in western country, will show sympathy to people suffering such persecution, because they know what they (communist regimes) are, and hope to make them disappear. People of my age also experienced the Cold War, and deeply know the danger of the Communist Party of the USSR. You will be surprised when you know how many people will express their concerns. The only thing is that you should allow them time to stop here and to see."

Naomi appreciated the Falun Gong practitioners' truth-clarification events, and suggested that practitioners should use media to further clarify the truth. She said, "Today your presentation is very good, and I would say that simply because of this I stopped here, though I would pass here in a hurry. Seeing your presentation, your bright colors, and yellow practice clothes, I feel that the event here must be very touching and important. So I stopped here, and read the display boards and have opportunity to talk to the Falun Gong practitioners. Your presentation really has a powerful strength and is touching visually, and can help people understand what is happening. The best way to do it is to interest some journalists, so that they are able to write articles to be published in newspapers. Don't forget that we enjoy fully free press here. This is the best way I can think about. In the meantime, I hope you continue your current good practice; and I must again praise you for really doing well."

Psychotherapist: I originally didn't realize that the CCP is even more evil than the Communist Party of the former Soviet Union 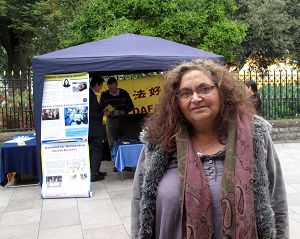 Arila expressed that she must practice Falun Gong

Arila is a psychotherapist. When she saw the Falun Gong practitioners' exercises demonstration and truth-clarification display boards in Cardiff City Centre on Saturday, she immediately signed the guest book against the persecution. Sunday she came to the event again, and asked whether there were any local practise sites. She said that she must learn and practice Falun Gong.

Arila believes that the CCP's persecution of Falun Gong fully illustrates the evil of the CCP. She said, "What I saw here shocked me very much. From what they did to students in 1989 I knew that the CCP was very evil. But I still didn't realise, until today, that it is even more evil than the Communist Party in the former Soviet Union." Arila encouraged Falun Gong practitioners to clarify the truth more to the local media. She also asked for more leaflets, and said, "Next week the university will start the new semester, and I am going to hand out those leaflets to students."

A music student : the sole aim of the Chinese Communist Party's persecution of Falun Gong is to seize control over everything

Just finishing his university degree in music, Dan, a young British man had been reading in front of the display boards for a long time. The reporter noticed that his face turned to be very serious when reading about the CCP's live harvesting of Falun Gong practitioners' organs for profit. He said, "I am surprised on seeing such information. It is hard for me to believe that a state can allow such things to happen; and other countries just stand aside and say nothing. I hope there will be other people who can stand up and come forward. Falun Gong is a very peaceful practice, and everyone has the right to stick to their belief, especially when their belief does not affect other people. What they (CCP) have done just makes people angry, and eventually they (the persecutors) will regret.' 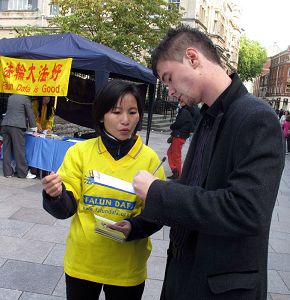 When being asked whether he could understand the CCP's brutal atrocities, Dan expressed that the sole aim of Chinese Communist Party's persecution of Falun Gong was to seize control over everything. He added, "Control. They just want to control--control the media, control everything. In our country there is much more freedom. In reality, without violence, without control, without all those things, they (CCP) might not be able to exist."

Dan also expressed his support for Falun Gong practitioners to continue to go their own way. He said, "I am not a religious person, but I feel everyone has his own way. If this practice is very well received by people, and can purify people's hearts, they should continue this. Such behavior (CCP's persecution of Falun Gong) makes people feel sick."

An Amnesty International member: people should come to understand and talk about these facts.

John is an IT student at university, and also a member of Amnesty International. He very much supported Falun Gong practitioners' truth-clarification events. He believed that people should widely spread the message about the CPP's persecution of Falun Gong. He said, "There is no doubt that the community should come forward to understand the reality. People should spread the message, especially about those terrible facts revealed here. People should come to understand and talk about these truths, and allow more organisations and individuals to know. 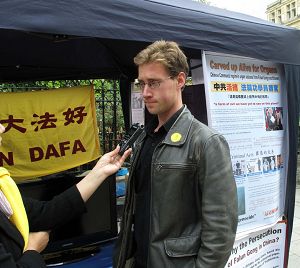 When interviewed, John expressed that people should widely spread the message about the Chinese Communist Party's persecution of Falun Gong

After understanding the truth about the CCP's persecution of Falun Gong, he condemned the CCP's rogue practice of hiding the truth. He said, "I am very astonished, that in a contemporary society, such things can happen, and can happen under cover. People just don't know what is happening in reality. The CCP's propaganda machine hides the truth at higher level, and in reality they persecute people who believe in Falun Gong."

Finally, John expressed, as a member of Amnesty International, he will make an effort to stop the persecution against Falun Gong. He said, "Of course, if human rights in any place or individual freedom is invaded, I have no other choice. I will come forward to help solve these problems." When he left the stand, John especially asked for more Falun Gong truth-clarification leaflets, saying they would allow more people to understand the truth. 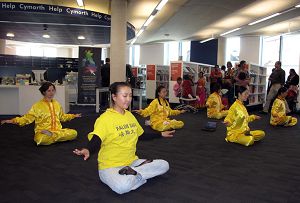 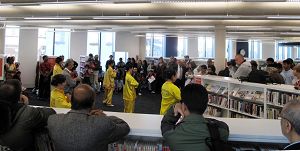 In addition, a library in the Cardiff City Centre also invited Falun Gong practitioners to demonstrate the Falun Gong Exercises at their Multicultural Festival. The demonstration was very well received by the audience. Pridi, the organiser of the festival, said, "The exercises are brilliant, and were very well received." Philip, a Cardiff senior citizen, followed the practitioners' demonstration all the time, when the practitioners were presenting the exercises. When asked about his first impression of Falun Gong, Philip said, "Peacefulness. Peaceful heart, healthy body."

“Switzerland: Tourists and Residents in Lucerne Show Their Support for Falun Gong”