(Clearwisdom.net) Every Saturday throughout the summer, Falun Gong practitioners from Belgium had a booth at the busiest spot in Brussels, passing out materials and clarifying the truth of Falun Gong and the persecution to the public, especially to the Chinese tourists. 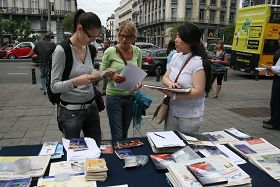 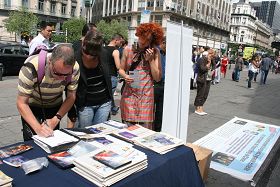 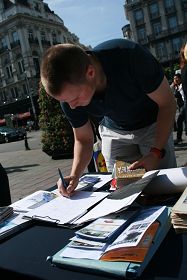 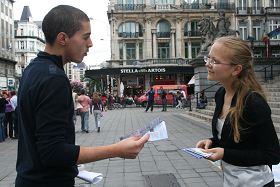 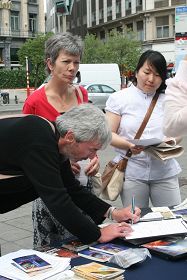 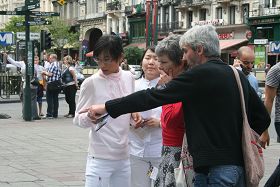 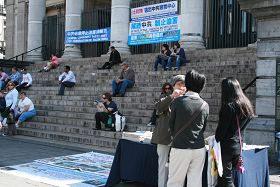 Clarifying the truth to Chinese tourists 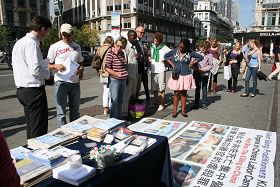 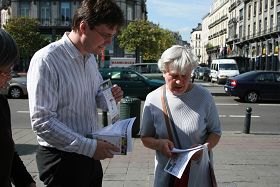 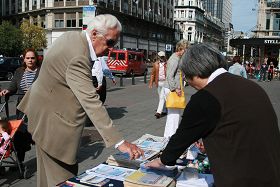 Many local citizens and tourists were attracted to the practitioners' booth, including many Chinese people. Ms. Zhu, a local practitioner, said: "Nowadays many Chinese tourists are willing to talk to us. They accept materials and quit the party. Some of them say they have read the Nine Commentaries on the Communist Party, and ask us for more materials."

Ms. Zhu continued: "Many Chinese tourists took photos of our booths. They said they want to show the pictures to their friends in China." Practitioners tell Chinese tourists that they are volunteers, and don't make any money from helping people quit the party. They tell people that they just want more Chinese to recognize the evil nature of the Chinese Communist Party, and quit it for a bright future.

Ms. Xu, another local practitioner, said: "Almost every Chinese tourist wants the truth-clarifying DVDs, although some of them don't dare to accept them in front of others. When we give the DVDs to them when others don't see, they are very grateful. Once, a Chinese tourist said to me that practitioners are great and will be remembered in history. When they learn the truth, their attitude towards Falun Gong and the CCP changes."

Practitioner Ms. Yang said: "Many Westerners have praised us. Some Westerners said to us that hanging up banners is a good way to clarify the truth, because although the Chinese people don't dare to accept flyers, they can read the banners, and tell their friends in China about what they see on the banners. Many Westerners have signed our petition. Some of them asked us, after signing their names, what else they can do to help us."