Falun Dafa Practitioner: "I am the most fortunate being in the universe!" (Photo)

(Clearwisdom.net) After she started to practice Falun Dafa, Ms. Yao Shuhua understood many questions she had about life and she experienced happiness that she had never had in the past. She said, "I finally understood what happiness means after I started practicing Falun Dafa. I am the most fortunate being in the universe!" 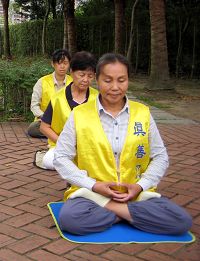 Ms. Yao Shuhua began to have a bright and happy life after she started practicing Falun Gong

Ms. Yao was born in Taixi Village, Yunlin County, Taiwan. She was the second child among her six siblings. When she was 13 years old, she had already started to help her mother sell vegetables to support their family of eight people and to pay off her father's gambling debts.

After she reached her twenties, she married and lived in the Taipei metropolitan area. However, her husband was also addicted to gambling and indulged in extravagant pleasure-seeking. Ms. Yao was once again immersed in the nightmare of working hard to raise the family and paying off her husband's gambling debts. She usually had to work two jobs to make ends meet.

Seven years later, while Ms. Yao was pregnant with her second daughter, her husband had an affair. She decided to divorce him and she took on all the responsibilities of bringing up her newborn and six-year-old daughters. She had high requirements for her elder daughter and often asked her to take care of her younger sister. Her elder daughter felt her mother's requirements were unfair and the relationship between them was quite intense.

Later on, her ex-husband married again and her ex-father-in-law insisted on taking both of his granddaughters. Her seven-year-old younger daughter was reluctant to leave, but her 13-year-old elder daughter left without looking back.

At this time, the incurable pain in her back became even worse, and she also had hepatitis C and gall-stones. Persuaded by her sister and brother-in-law, Ms. Yao went to a hospital and stayed there to undergo physical examinations. One of her friends went to the bookstore and brought her Lectures in the United States and Zhuan Falun. Ms. Yao was immediately deeply attracted to Master's teachings. She could hardly put the books down and finished reading them at once. Three days later, Ms. Yao told the chief nurse: "I'm leaving the hospital. I want to practice Falun Gong."

However, because the hospital staff had already scheduled the examination for her, she didn't want to cause them extra trouble and so she took all the tests as scheduled. But the results showed that her gall stones had disappeared. Soon after, moved by Ms. Yao's miraculous recovery, her sister and brother-in-law also started practicing Dafa.

Ms. Yao attended the 9-day Fa-teaching classes on March 1, 2000. She said: "The first time I finished reading Zhuan Falun, I decided to cultivate until the end. After I started cultivation practice in Dafa, I finally understood what true happiness means. I have found the direction of my life within the principles of Truthfulness-Compassion-Forbearance. As I cultivate myself more and more, I become more and more delighted every day. And every single day in my life is so enriched and meaningful."

One day, Ms. Yao saw her elder daughter, who had come back to visit her teacher. Ms. Yao expected her daughter to come and see her afterward. But she didn't come, and didn't even phone her mom, which made Ms. Yao very sad.

However, as a cultivator, Ms. Yao had learned to think about others first so she considered the situation from her daughter's standpoint. She looked inward, and realized that she had blamed her ex-husband too harshly in front of her elder daughter in the past, without considering her feelings for her dad. After all, her daughter had only been a child when her parents divorced, and Ms. Yao had been very demanding of her, not to mention that she often lost her temper with her daughter.

Her younger daughter came to visit her every week. She learned to take buses and how to transfer from the bus to the subway all by herself. Ms. Yao invited her to study the Fa with her. Several months later, her younger daughter also attended the 9-day classes and became a little Dafa disciple.

Ms. Yao said: "My body has become very light since I started cultivation. All those recurring illnesses disappeared without my realizing it. And the resentment in my heart also went away gradually. Now people all say I have become cheerful and pleasant when they see me. Before I started cultivation practice, I didn't know what happiness was. I just worked every day, and my health was poor. I even frowned in my sleep. Now, I find it hard to frown. Practicing Falun Dafa completely changed my life. I am the most fortunate being in the universe."

One year later, her ex-husband divorced again. Her younger daughter came back to live with her, but her elder daughter stayed with her step-mother with the excuse of taking care of her new-born sister.

Three years later, after her step-mother moved to the United States, Ms. Yao's elder daughter finally came back to her, with the same cold attitude. While still ignoring Ms. Yao at home, her elder daughter noticed the great changes in her mother. One day, she wrote Ms. Yao a note: "Mom, I have noticed your changes. You have become more healthy and you no longer shout at me any more. I support you in practicing Falun Gong." Ms. Yao was very surprised and delighted.

At one point, Ms. Yao learned that there was going to be a study camp for young Falun Dafa practitioners, she encouraged her elder daughter who was in high school at that time: "You have seen my changes after I started practicing Falun Gong. It doesn't matter whether you want to practice it yourself. But many teenagers have experienced great changes after they started practicing Falun Gong and most of them study very well at school. The study camp only takes three days, the attendees are all teenagers. I won't force you to attend, you can make the decision yourself." Her elder daughter registered for the study camp and came back three days later without any noticeable changes. Ms. Yao only cared for her quietly and didn't ask many questions, so as to avoid putting pressure on her.

Ms. Yao said: "Looking back into the past, I had a lot of attachments for personal fame, profits and desires. My personal experiences have demonstrated that Falun Dafa really helps a person improve and raise their moral standards. Every practitioner around me is trying to be a better and better person in their cultivation."

"I am one of millions of Falun Gong practitioners around the world, we have all witnessed the great benefits in us both mentally and physically. As a practitioner, I have the responsibility to tell people that Falun Dafa is good, and I as a responsible practitioner I also expose the communist regime's lies about Falun Gong and tell people about the truth of the persecution."

“The Innocent and the Cunning”