(Clearwisdom.net) New York-based Shen Yun Performing Arts' seven-show run in Hong Kong, scheduled from January 27 through the 31st, sold out in five days. Then, just a few days before the first performance, on January 21, 2010, the Hong Kong Immigration Department denied entry visas to six of Shen Yun's production staff. Unable to operate the show's complex stage setup without these key staff members, Shen Yun was forced to cancel all seven of its shows in Hong Kong on January 23, 2010. Upon hearing how the Hong Kong District Government complied with the Chinese Communist Party (CCP) regime to suppress the Shen Yun shows in Hong Kong, many prominent people from different countries have stepped forward to condemn the Hong Kong government's succumbing to CCP pressure.

Shen Yun, a world class performing arts production, started touring the world in 2007. In the 2009 season, Shen Yun presented over 300 shows in nearly 100 cities in over 20 countries. Audience reaction to the show has been consistently enthusiastic. Prominent artists and officials around the world have praised the company for bringing the essence of Chinese traditional culture to the world. Yet surprisingly, in an area inside China - Hong Kong, a Special District claimed to enjoy a policy of "One Country, Two Systems" - the District Authority yielded to pressure from the CCP and denied performance visas to six key crew members of the show.

Lord Avebury: The Chinese Communist regime is the primary reason behind the Hong Kong incident

After hearing the news that Hong Kong complied with the CCP to interfere with Shen Yun's shows in the city, many United Kingdom political leaders who care about Hong Kong expressed disappointment. Lord Avebury, Member of Parliament, believes that the Chinese Communist regime is the primary reason behind the Hong Kong authority's denial of visas. 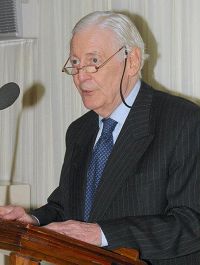 Lord Avebury: "The Chinese Communist regime is the primary reason behind the Hong Kong incident."

Lord Avebury told the Epoch Times that the Chinese Communist regime has tried to stop Shen Yun shows all over the world from the very beginning. Since Hong Kong was returned to China in 1997, the promised "One Country, Two Systems" political freedom has not been fully implemented. Lord Avebury said that, for historical reasons, people in Hong Kong still enjoy some freedom and rights that mainland Chinese don't have. But the so-called "One Country, Two Systems" acclaimed by Beijing is not being realized.

Lord Avebury is well known for his efforts to promote human rights and freedom. In 1976, he led the process to establish the Human Rights Committee in Parliament and was the Chairman of the Committee for 21 years. In 2009, he was awarded the World Freedom Award by the World Freedom Organization in recognition of his effort to safeguard human rights in many countries.

Well known priest Franco Mella said that the Hong Kong authorities' decision to deny performance visas to six Shen Yun Performing Arts staff members is "stupid and irrational." He said that it has no reason to deny the visas to an arts group trying to revive traditional Chinese culture. 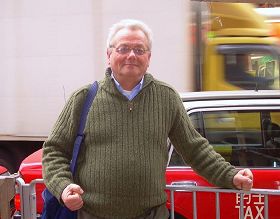 He said that there were many international performance companies traveling to Hong Kong, and the people of Hong Kong have their rights and the freedom to enjoy any show they like. "Shen Yun Performing Arts understands the meaning of life and the universe. The government's action is irrational," said Father Mella.

He added that the government's action is unwise because it will only have the opposite effect, letting more people around the world know about Shen Yun.

"[The District Authority] is following orders from the Chinese Communist Party. They are afraid that the Shen Yun show in Hong Kong will anger Beijing and give people hope and let people see the CCP's lies," Father Mella said. He also said that he hopes the Hong Kong government doesn't have a blacklist as it claimed, and he hopes that it won't treat artists like terrorists.

Presentation House Theatre is the largest theater in the metropolitan Vancouver area. "The professional technicians are very important to a show," Ms. Leadlay said, "because only those staff members know the details of the show and understand the requirements of the performance so that the show can be successful."

As a senior art director, Ms. Leadlay said that the Heritage Ministry of the Canadian government and the related departments within the American government should talk to the Hong Kong government about issuing the six performance visas immediately.

Former board member of the largest private IT development company in Western Canada: Hong Kong is losing its safe investment environment

Mr. Dale Jackaman is a former board member and senior manager of the largest private IT development company in western Canada. He is now running his own computer security company. After learning that the Hong Kong government had denied entry visas to six Shen Yun staff members so as to force Shen Yun to cancel its seven sold-out shows, he expressed worry about Hong Kong losing its safe investment environment. 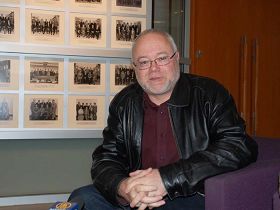 Mr. Jackaman is a loyal Shen Yun fan. Since Shen Yun's first performance in Vancouver, he has seen the show every year. Recalling last year's performances, he still remembers many details that moved him. Jackaman said the show is a grand performance that can't be described in words. He is anticipating Shen Yun's return to Vancouver this coming March for its third visit.

"This is another dirty deed of the Chinese Communist Party," Mr. Jackaman said. "I have watched and experienced the Shen Yun shows in person. It is a beautiful show with moral values. It is unforgivable that the Communist Party would do such a dirty thing to an excellent show.

"Being an owner of a computer security company, I feel that Hong Kong is losing a safe investment environment," he added. "Since Hong Kong was returned to China in 1997, the Beijing regime has had more and more impact on Hong Kong's political and economical environment. The controls are becoming more and more strict. The infiltration in finance and the media is very deep. But we must not accept it, and the Hong Kong people shall not accept it," said Mr. Jackaman.

Speaking about the sold-out tickets and the loss of the canceled shows, Mr. Jackaman said, "If someone used to think that investing in Hong Kong was safer than investing in Mainland China, now that is no longer true."

“Florida City Mayor and Wife: "We Enjoyed It Very Much" (Photo) ”