(Clearwisdom.net) All seven shows of the Shen Yun Performing Arts were canceled in Hong Kong. Six of Shen Yun's specialized technicians' visa applications were denied several days before their scheduled arrival. The Immigration Department claimed Shen Yun should hire local labor to replace the six technicians. On Monday January 25, 2010, citizens went to the Immigration Department to protest the Chinese Communist regime's interference with the issue. 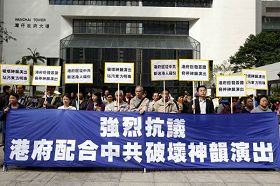 Hong Kong citizens protest in front of the Immigration Department.

Dozens of people who bought tickets to the shows arrived at the Immigration Department on Monday afternoon. Many of them came from abroad. Li Juan flew to Hong Kong from New York on January 25 only to find out that Shen Yun's shows had been canceled. She said that after seeing the shows in the US, she was very impressed and invited her relatives in China to see the show live in Hong Kong.

Ms. Li did not expect the Hong Kong government to be involved in the issue. "Hong Kong is a place that respects human rights and freedom of belief. The government should open its arms to welcome a world-class art performance. There is no excuse for doing such a thing under any kind of pressure. It's a shame," said Ms. Li.

Citizens in Hong Kong protest in front of the Immigration Department

Ms. Li proposed that the host of the Shen Yun shows demand compensation from the Hong Kong government. "For the artists' airfares, hotel expenses, and time wasted. It also caused Shen Yun a great financial loss. Many people who bought tickets and traveled all the way to Hong Kong should also be compensated. I believe that if China had not taken over Hong Kong, such a thing would not have happened."

Chow Wai-tung, former member of the Hong Kong Legislative Council, saw the show in Taiwan last year and bought four tickets for his wife and relatives this year. He condemned the Hong Kong government for ignoring the people's will. "The show is about traditional culture and teaches people to be good." Chow believes that the reason for denying the visa applications does not make sense. "It was interference by the Chinese Communist regime. Since Hong Kong was returned to China, things have changed. The system of freedom and rule-by-law is falling apart. It's pathetic," said Mr. Chow.

Mr. Chow has invited many art groups to perform in Hong Kong in the past, and he has never had a problem. "Before Hong Kong was returned to China, different performing groups from around the world, including China, came here to perform. This incident is an example of political interference in a cultural art performance. Shen Yun's shows are about traditional culture and have a very positive influence on people's spirituality."

Mr. Chow condemned officials in the Immigration Department for being accomplices of the Chinese Communist Party (CCP). "I know the officials have their pressures. But there are laws and there are ways to do things right." He hoped that Immigration would quickly issue the visas for the six core production staff so people could see the shows. He said that it was good for Hong Kong's economy and cultural exchange.

Ms. Hong bought over 30 tickets for her family, relatives, and business partners. She had a hard time believing that Hong Kong had to listen to the CCP as to whether an art group could perform or not. She was disappointed that "One country, two systems" did not exist anymore.

Madam Chen bought over 20 tickets for her relatives and friends from England, Thailand, and China. She did not know what to tell them. She couldn't believe the Hong Kong government had bowed to the CCP. Her family in Thailand had already bought their plane tickets and will still come on January 27 to demand an explanation from the government.

“Eliminating the Attachment to Sentimentality and Treating My Family with Benevolence”