(Clearwisdom.net)On August 13, 2009, the annual Multi-Cultural Festival Day took place in Warsaw. The European Divine Land Marching Band took part in the parade and brought the good news of Falun Dafa to the Polish people. On the previous day, the marching band came to the local Chinatown and also in front of the Chinese embassy, and performed.

At around noon of August 29, the European Divine Land Marching Band members filled the main road of Chinatown in Wolka Kosowska in the capital of Poland. 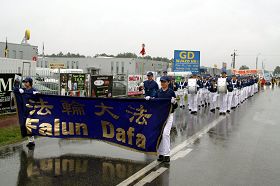 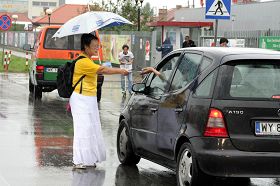 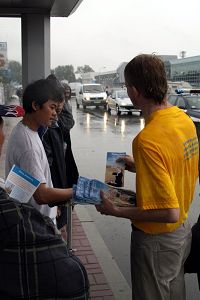 This is the first time the European Divine Land Marching Band has performed in Warsaw's Chinatown.

On this day, the sky was overcast. Following the beginning of the marching band's performance, rain fell from the sky, but this did not affect the band's performance. Although the heavy rain made it so that people could only look at them from behind their windows, they still heard "The Holy Law Wheel King", "Falun Dafa Is Good", "The Fa Rectifies the Cosmos", "A Gift of Treasure" and such musical compositions.

Falun Gong practitioners gave flyers to those passing by to tell them about Falun Dafa and to expose the persecution that is happening in China.

In front of the Chinese Consulate

After the skies cleared up, the marching band went to the Chinese consulate. 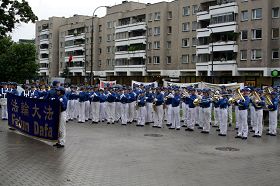 The marching band in front of the Chinese consulate in Poland, protesting against the CCP's persecution 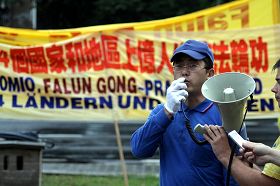 In front of the Chinese consulate, President of the Polish Falun Dafa Association Mr. Tomokkowalski called out sincerely to those working inside the consulate. So far close to 60 million Chinese people have withdrawn from the CCP and its affiliated organizations, and he called upon the consulate workers to do the same.

A member of the Divine Land Marching Band used his personal experience to expose the CCP's brutal persecution of Falun Gong. Just because he believed in Truth-Compassion-Forbearance, he was sent to a labor camp three times. He refused to give up his belief, however, and urged the consulate workers to see the CCP for what it is.

A practitioner from Poland said that the members of the marching band spent their own money to come to Poland to say, "Falun Dafa is good". He continued to say, "The CCP has persecuted Falun Gong for ten years, but Falun Gong has spread to over one hundred countries around the world. All of us with a conscience must think about why this is so. In spite of the brutal persecution, Our opposing the persecution is not only for our own sake, but for all those people in China."

Warm Welcome at the Multi-Cultural Day 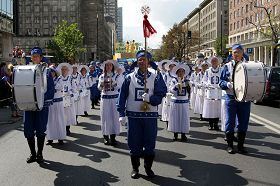 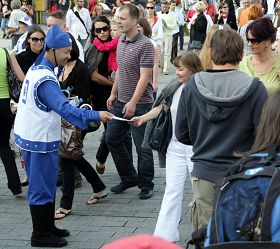 After the parade, the band members handed out flyers 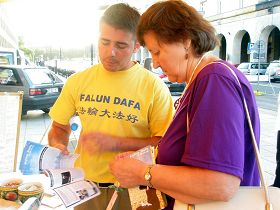 Talking to passers-by about Falun Gong and the persecution

Over one hundred groups took part, and the city center was packed with visitors. The Falun Gong procession was warmly welcomed. Behind the Divine Land Marching Band was a gigantic boat-shaped float, carrying practitioners wearing traditional clothing sitting in their meditation pose.

After three hours of the parade, the band members helped to pass out flyers about Falun Gong and exposing the persecution.