(Clearwisdom.net) On August 30, 2009, the 2009 UK Falun Dafa Cultivation Experience Sharing Conference was held in London. Twenty-one Western and Chinese practitioners made speeches at the conference and shared their experiences of validating the Fa and personal cultivation. 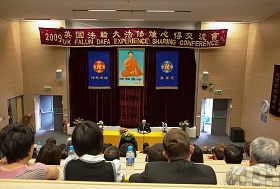 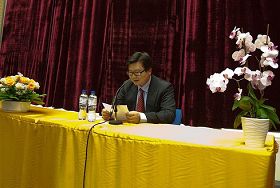 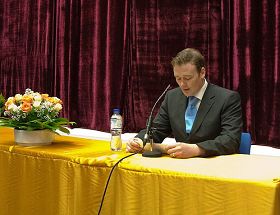 Speaking at the conference

New practitioners talked about their experiences of assimilating to Truthfulness-Compassion-Forbearance and improving their Xinxing. Several new practitioners expressed in their sharing the sense of responsibility of a Fa-rectification period Dafa disciple, as well as the sense of urgency for saving sentient beings.

Mr. Yang, from Northern England, recalled his experience of obtaining the Fa and how quickly he went from personal cultivation to validating the Fa within one year. He said, "With the increasing of Fa-study, I gradually deepened my understanding of Fa principles. I realized that to be able to obtain the Fa during the Fa-rectification period, I am already a life admired by the whole universe, but I still did not put the Fa as the first priority and concealed a heart of selfishness. That should not be there." He decided to then step forward and participate in distributing the Epoch Times newspaper. "I know that what I am doing is the most righteous thing in the whole universe, and I also understand the importance of doing well the three things - studying the Fa well, clarifying the truth and sending forth righteous thoughts."

Mr. David English started the practice from 2005, and he said, "I have begun to realise how real and important this is and how we cannot slack off for even one minute, as we will be taken advantage of and sentient beings will perish." "Many sentient beings are waiting and already we have too little time, I hope in the time ahead I can do better and face my Master with no shame."

A London-based practitioner, Ms. Liang, said, "For these several years, wherever I have gone, or what kind of being I bumped into (especially with Chinese people), I would to the best of my ability take the initiative to converse with that person, and then tell the person the facts about Falun Gong."

Ms. Chen has cultivated for thirteen years and came to the UK three years ago. When she was distributing materials in front of the Chinese Consulate in Manchester, she encountered many Chinese people. She said that she realized, "Be it ordinary people or staff of the CCP, we must treat them with kindness so that they can feel the compassion and tolerance of Dafa disciples. In Chinatown there are people watching Dafa disciples every minute. We must maintain a peaceful state of mind. To do that, we must be able to cultivate to that level of compassion. These minute details can change people more effectively."

Ms. Li came to the UK in 2008, when she applied for asylum from a deportation centre. She seized the opportunity to talk to the Chinese people there and encouraged them to quit the CCP. After her application was granted, she cherished her opportunity even more. She said, "There were still a few Chinese people there who had not yet renounced the CCP. I sang the song "Coming for You" for them. I had never sung a song before others, much less in front of a dozen people. At that time the scenes of saving sentient beings in China came to my mind; regardless of the hardship and the risk of being arrested, practitioners in China went from street to street to tell people the facts. Those scenes indeed moved me. When I finished singing the song with tears in my eyes, they applauded warmly and with true happiness. I told them that there is a quitting the CCP centre in Chinatown and asked them to seize the time to do so if they get the chance."

Based on the experience of talking to her Member of Parliament, Ms. Gao encouraged more practitioners to break through human notions to seek out their MP's, "I wanted to share my experience with those practitioners who have similar notions and barriers, to encourage each other not to wait, not to lean on others. Every practitioner should fulfil. his or her duty to clarify the truth to their own MP. Do it with perseverance but without pursuit, and we will see the changes."

Ms. Lee, who worked at the ticketing centre for last two years at Shen Yun shows, said, "During this period, I went through some conflicts and clashes with a fellow practitioner. My xinxing improved during the course of looking inward. Later on, I realised that the creation of all these conflicts were from my own human notions. Whether the other party was right or wrong, it applies to my own cultivation."

Ms. Ng Chow May, a member of the European Divine Land Marching Band, owns a Chinese Takeaway with her husband. She shared her experiences of handling well the family needs and taking part in activities in various places across the Europe.

Based on the experience of coordinating the Truthfulness-Compassion-Forbearance art exhibition, Ms. Jane Werrell realized the importance of having a pure state of mind in order to effectively achieve the goal of saving sentient beings.

Ms Shu Yu talked about the changes she experienced after reciting the Fa, and how she was able to better deal with conflicts and issues during the promotion of Shen Yun shows.