(Clearwisdom.net) September 12, 2009 was a Saturday, so Falun Gong practitioners once again came to St. Martin's Place in the city centre of London to hold a face to face truth clarification activity, disseminating information about the goodness of Falun Dafa and exposing the CCP's brutal persecution of Falun Gong. Many people condemned the CCP's brutality, and supported Falun Gong's opposition to the persecution. 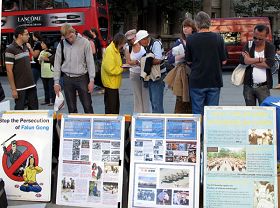 St. Martin's place, which is located in the centre of London, is a place bustling with cars and people, and on the weekends it is even busier. Falun Gong practitioners have continued to clarify the truth here for several weekends in succession, and every time the basic form of the activity doesn't change: they place display boards out for people to see, demonstrate the five exercises of Falun Gong, hand out flyers and other materials, talk to people face to face and encourage them to sign the petition against the persecution.

The CCP are just as bad as the Nazi fascists 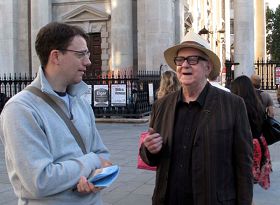 Elderly gentleman on the right, who has just come to know the true situation, talking to an English practitioner

One retired gentleman said to the Falun Gong practitioner who gave him a flyer, "I have seen you here already before, and I have already signed my name; however I wish to sign again."

He was talking to the practitioner who was handing out flyers nearby, and told this practitioner that he felt that the CCP that persecutes Falun Gong is just as bad as the Nazis back in their day.

The more people that come to understand the truth, the weaker the persecution will get 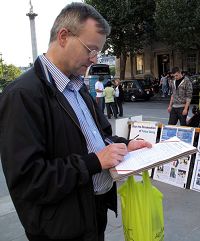 Man returns to sign his name on the petition against the persecution.

Once, when practitioners were holding an activity in St. Martin's Place not long ago, the practitioner had talked to a man who said, "I know that they (the CCP) are also persecuting members of the Christian house church."

He said to us, "The more people that know the truth, the weaker the persecution will get until it is stopped."

The practitioner gave him a Nine Commentaries on the Communist Party DVD and VCD with an introduction to Falun Dafa, and he said that he would watch them when he got home in the evening.

The first time coming to understand the truth 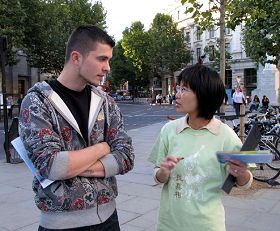 A young man read the posters one by one, after which he found the practitioner at the petition table and signed his name.

He told practitioners that it was the first time he had heard of Falun Gong, and after seeing the display boards, he couldn't understand why such a peaceful exercise method would be persecuted. A practitioner patiently answered his questions, telling him that Falun Gong teaches people to cultivate Zhen Shan Ren (Truth - Compassion - Forbearance), whereas the evil CCP maintains its power through lies and violence, and that the CCP's evil nature determined that it had no way to tolerate one hundred million people having a belief in Truth-Compassion-Forbearance.

The queries of an overseas Chinese man from Thailand 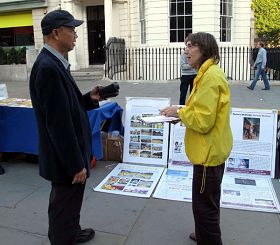 A Chinese father and son were just passing by St. Martin's Place. The father, who was just talking to his son by his side, raised his head and saw the Falun Gong practitioners demonstrating the exercises. The two of them stopped, after which the father took out a video recorder from his bag and started filming.

It was not difficult to see how the lies and fabrications that the evil CCP had made up about Falun Gong had poisoned a large number of overseas Chinese from this man's angry and threatening questions. In reply to the two main questions which he asked, which were: "Doesn't Falun Gong oppose the Chinese government", and "The Chinese government says that it suppressed Falun Gong because it was a threat to the stability of society, is Falun Gong a threat to the stability of society or not?", three Falun Gong practitioners took turns answering from different perspectives.

One practitioner told him that the CCP deliberately equates the CCP with China. It is not that Falun Gong opposes the Chinese government, but it is the CCP that opposes Truth-Compassion-Forbearance; Falun Gong is not a threat to the stability of society-- it is the CCP, which tries to maintain its rule by violence and lies, that is afraid that the people who follow Truth-Compassion-Forbearance will no longer be controlled to do bad things.

After hearing this, the man pointed his camera at the display boards, and quietly recorded the event until he left.