On July 17, about 100 Falun Gong practitioners in Singapore held a candlelight vigil in memory of those who have lost their lives in the 10-year-long persecution of Falun Gong. They displayed a banner with the words, "Only dissolving the CCP can stop the persecution." 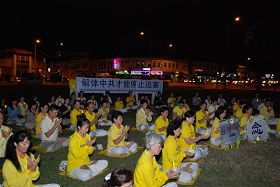 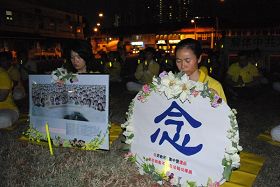 Falun Gong practitioner Mr. Zhang shared that he has benefited a lot from practicing Falun Gong. "The persecution has gone on for ten years. If we don't stand up against it, or if we ignore it, the moral standard of humanity will become corrupted," said Mr. Zhang. He has continuously clarified the truth of Falun Gong and exposed the persecution to government officials, Singapore citizens and tourists.

Mr. Sun was jailed and tortured in China because he practices Falun Gong. His sister was arrested two years ago and is still imprisoned. Mr. Sun said that he feels he must stand up to expose the persecution to the world.

Ms. Li from Guangdong said, "Many people thought the persecution had ended, because the Chinese newspapers and TV stations stopped mentioning Falun Gong. But actually, it is not true. Many of my Falun Gong friends have been arrested recently. I have lost contact with them." Ms. Li called upon Chinese people to learn the truth and help to stop the persecution.

Ms. Tian from Liaoning told her own story. Her husband was arrested in Dalian this January 2009, because they posted a notice reading "Falun Dafa is good" and passed out information about the book the Nine Commentaries on the Communist Party. Her husband has been jailed for six months. His lawyer, Wang Yonghang, was recently arrested because he defended Falun Gong. Ms. Tian said, "The government does not allow lawyers to defend Falun Gong practitioners. They are only allowed to find practitioners guilty, but never not guilty. It is ridiculous."

Ms. Tian called upon people to not keep silent in the face of persecution. "I came overseas to call for more attention to the persecution. I hope people will hear my voice and make the right decision."

Falun Gong, also known as Falun Dafa, is a traditional Chinese spiritual discipline for mind and body. The practice involves slow, gentle movements and meditation. It is easy to learn, enjoyable to practice, and free of charge. Its principles are based on Truthfulness-Compassion-Forbearance. The practice began in China in 1992 and quickly spread by word of mouth throughout China and then beyond. Its beneficial effects in uplifting an individual's physical, mental, and spiritual health, not to mention its positive influence in the community and society as a whole, have been undeniable. In fact, Falun Gong is practiced by over 100 million people in over 110 countries and regions. The main works of Falun Gong are available in over 30 languages.

“Thailand: Rally and March to Protest the Persecution (Photos)”