On July 18, Falun Gong practitioners from Tainan, Taiwan, held a series of activities to protest the 10-year-long persecution of Falun Gong in China. During the day, practitioners clarified the truth to tourists at several well-known tourist spots, and in the evening they held a candlelight vigil at Tungning Park, in memory of those practitioners who lost their lives in the persecution. 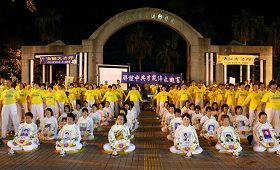 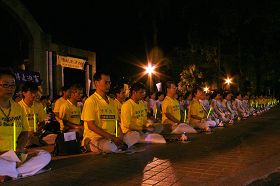 Practitioners displayed several banners, which read, "Falun Dafa Is Good" and "Dissolving the CCP Is the Only Way to End the Persecution." The candlelight vigil started at 7:30 in the evening. First, practitioners played videos that reviewed the major events and activities protesting the persecution in Mainland China over the last 10 years. Then practitioners sat in silence in memory of those who died in the persecution. They also demonstrated the Falun Gong exercises. The activities concluded with the performance of four songs composed by practitioners.

Mr. Lin, a Falun Gong practitioner, said, "The persecution will fail for sure. In the last ten years, more and more people have learned about Falun Gong, and some of them started practicing it themselves. Falun Gong has spread to more than 100 countries throughout the world. We call upon everyone to help stop the persecution."

Falun Gong, also known as Falun Dafa, is a traditional Chinese spiritual discipline for mind and body. The practice involves slow, gentle movements and meditation. It is easy to learn, enjoyable to practice, and free of charge. Its principles are based on Truthfulness-Compassion-Forbearance. The practice began in China in 1992 and quickly spread by word of mouth throughout China and then beyond. Its beneficial effects in uplifting an individual's physical, mental, and spiritual health, not to mention its positive influence in the community and society as a whole, have been undeniable. In fact, Falun Gong is practiced by over 100 million people in over 100 countries and regions. The main works of Falun Gong are available in over 30 languages.

“Washington DC: Freedom for Falun Gong Rally at the National Mall Attracts Attention of People from Around the World (Photos)”