(Clearwisdom.net) The San Jose Holiday Parade, one of the twenty-five largest parades in the United States, was held on December 6, 2009, with more than 100,000 spectators. Local Falun Gong practitioners were invited to perform in the parade. 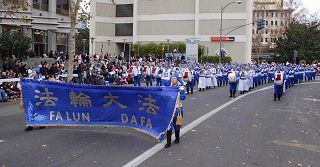 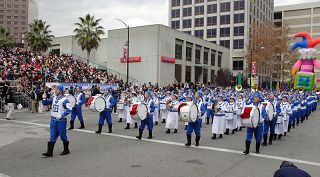 The Falun Gong group was the only one consisting of Chinese people in the parade. The Divine Land Marching Band performed in the parade, and was warmly welcomed by spectators.

The organizer of the parade said that San Jose, the tenth-largest city in the U.S., welcomes Falun Gong practitioners.

Chuck Reed, the mayor of San Jose, supports Falun Gong. He opposes the persecution, and has expressed that Falun Gong practitioners are protected by the law in San Jose.

The San Jose Holiday Parade was first held in 1981. More than one million people watch it on network TV.

“Growing Up in Dafa”