(Clearwisdom.net) On December 5, 2009, the tenth annual Oakland Holiday Parade was held in downtown Oakland. About ninety groups attended, with more than 100,000 people watching.

The Divine Land Marching Band, consisting of Falun Gong practitioners from the western U.S., performed in the parade. 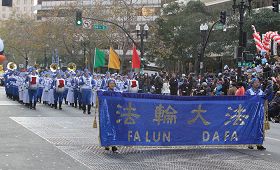 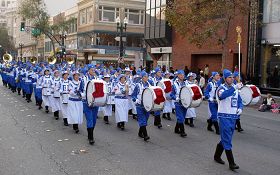 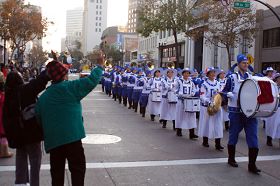 This was the second time that the Divine Land Marching Band participated in the parade. They were warmly welcomed by spectators.

Some people learned about Falun Gong and the principles of "Truthfulness-Compassion-Forbearance" during the parade. They expressed how much they liked the band's performance, and support for Falun Gong practitioners.

People from all over the America and Canada can watch this parade on TV, as it will be broadcast on PBS one hundred times.