The Peace and Rationality of Practitioners Touch People (Photos)

(Clearwisdom.net) On December 17 and 18, 2009, during the United Nations Climate Change Conference, Falun Gong practitioners went to the Bella Center in Copenhagen, Denmark, to protest the CCP's ten-year-long cruel persecution of Falun Gong. 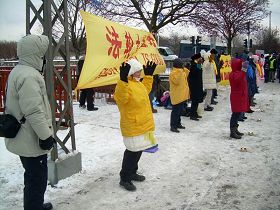 Practicing the exercises outside the Bella Center 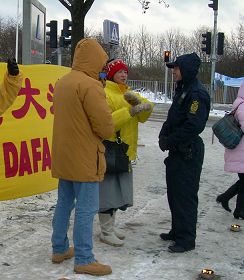 It was very cold and a heavy snow had just fallen. During the last two days of the conference, where leaders from more than 110 countries gathered, the whole world again focused on this northern European capital.

Outside the conference center in the chilly wind, Falun Gong practitioners from different countries in northern Europe practiced the exercises. They appealed to the conference participants to stop the Chinese Communist Party's persecution of Falun Gong. Their peaceful event moved the onlookers.

Because of the high level security, there were lots of police on duty outside the Conference Center. A policewoman came forward, pointed at the banner that read 'Falun Dafa is good,' and said to a practitioner from Denmark, "I know you. I once saw you and this banner outside the Chinese Embassy. You are doing very well." The 82-year-old practitioner experienced big changes both physically and mentally after he started to practice Falun Gong. His white hair has gradually turned black in recent years. Since the CCP regime started the persecution of Falun Gong in 1999, he has kept going to the Chinese Embassy every day to protest the persecution, regardless of bad weather.

Some police officers greeted the practitioners when they passed by each time, "It's so cold. Are you still OK?" A police officer told a practitioner, "I remember you. You were here in the autumn when the World Olympic Committee had a conference here. You are a kind practice group. I like you all."

It was even colder in the evening. Several police officers delivered hot coffee to the practitioners to warm them up.

Two young European fellows working as free media correspondents recorded the practitioners' exercises with a camcorder and interviewed Ms. Gu, a practitioner from Oslo. When they learned that the CCP persecutes Falun Gong practitioners and even harvests their organs, the man from Belgium said into the camcorder with tears rolling down his cheeks, "Falun Gong practitioners believe in Truthfulness-Compassion-Forbearance. Can you imagine they (the CCP regime) even harvest organs from these kind people when they are still alive?" They wrote down website addresses in order to learn more facts.

A Canadian TV reporter was attracted by the practitioners' peaceful exercises. He recorded them and interviewed Mr. Song, who was doing the exercises. Mr. Song told him, "The reason people come here from all over the world is to draw attention to the environment, to maintaining an environment suitable for humans and preventing climate change. But in China, the CCP never takes care of people's living conditions. The CCP uses every kind of evil means to persecute Falun Gong practitioners. Since 1999, more than 3,300 Falun Gong practitioners have died due to CCP-directed torture. Now the CCP regime is still harvesting organs from living Falun Gong practitioners. We come here to tell the world that Falun Gong teaches people to be good and to follow Truthfulness-Compassion-Forbearance, and that the persecution of Falun Gong must stop."

The practitioners encountered several such protest groups in the two days. They were all touched by the practitioners' goodness and rationality and became friendly.