(Clearwisdom.net) On December 12, 2009, the World Organization to Investigate the Persecution of Falun Gong (WOIPFG) published a revealing 30-minute conversation with a witness to organ harvesting from living Falun Gong practitioners. The witness had worked for the public security system of Liaoning Province. On April 9, 2002, the witness was on duty as an armed police guard and witnessed the entire process of two military surgeons harvesting organs from a live female Falun Gong practitioner in a operating room of the General Hospital of Shenyang Military Region. (Please click here to read the entire report: http://www.zhuichaguoji.org/en/index2.php?option=content&task=view&id=192&pop=1&page=0)

The General Hospital of Shenyang Military Region is also known as the Army General Hospital (Photo 1). It is located on Wenhua Road, in Shenhe District, Shenyang City, Liaoning Province. Its out-patient department building is at the intersection of Wenhua Road and Wuhai Street, east of the Wenhua Road Overpass. The hospital is 6.3 kilometers (3.9 miles) away, or less than 10 minutes by car, from the Public Security Bureau in Liaoning Province. 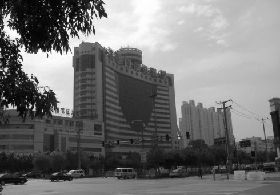 There are soldiers posted at the gate of the hospital. Many buildings in the hospitals are accessible by name tags and passes only. Similar to the layout of other Chinese military hospitals, the hospital contains a family living quarter, a cafeteria, an auditorium, a small retail store, and a club--all the necessary facilities. There is also a night market outside the gate. It is a self-sufficient little community.

In the 1990s, a big fight erupted between two gangs near the hospital. One of the individuals involved in the fight was seriously injured, and others that were wounded were rushed to the hospital's emergency room. As the doctors were getting ready to treat them, the other gang stormed in the emergency room and opened fire. Two bullets hit the ceiling. Out of panic, one of the nurses hit the hidden alarm button, and within seconds, a team of heavily armed soldiers rushed in. Many in the hospital were shocked, because no one outside the emergency room knew about the hidden alarm button. The armed soldiers came from a secret tunnel, all with small machine guns. Although the hospital is a military facility and all the medical staff are military, many rank and file did not know that the secret tunnel existed.

In 1978, the headquarters of the Military Region designated the Cardiovascular Surgery Department at the hospital as one of the first institutes of cardiovascular disease research for the People's Liberation Army (PLA). In 2000, the Cardiovascular Surgery Department was named one of the "key subjects" of the PLA, with more than 1,200 annual cardiovascular surgeries and close to 20,000 cardiopulmonary bypass surgeries (CPB). (Author's note: CPB mechanically circulates and oxygenates blood for the body while bypassing the heart and lungs. It uses a heart-lung machine to maintain perfusion to other body organs and tissues while the surgeon works in a bloodless surgical field. CPB can be used for the induction of total body hypothermia, a state in which the body can be maintained for up to 45 minutes without perfusion. The blood is cooled during CPB and returned to the body. The cooled blood slows the body's basal metabolic rate, decreasing its demand for oxygen.) This made the General Hospital of Shenyang Military Region No. 2 in the nation and No. 1 in the PLA with over 10,000 cases of CPB. The Cardiovascular Surgery ward and the intensive care units (ICU) are located on the fifteenth floor of the hospital. Han Yaling, the current vice president of the Shenyang Military Region General Hospital, the director of its Cardiovascular Surgery department, and the director of the Institute of Cardiovascular Disease, graduated from the Second Military Medical University. 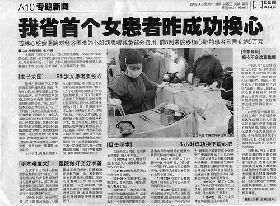 According to this information, the Cardiovascular Surgery Department at the General Hospital of Shenyang Military Region is a leading facility fully capable of performing heart transplant surgery in the PLA system. While the exterior design of the hospital is plain, the interior is quite complex, with a superb range of facilities to which low-ranking staff members and doctors do not have full access. The Institute of Cardiovascular Disease and the Cardiovascular Surgery Department have deep, historic roots in the Second Military Medical University.

“The Peace and Rationality of Practitioners Touch People (Photos) ”