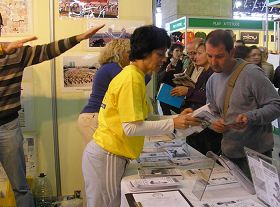 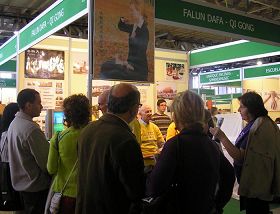 There were more than seven hundred organizations participating in the Expo, among them are health food manufacturers and business entities from all over the world, manufacturers of a variety of health products, clothing, jewelry, musical instruments, as well as organizations researching in the field of spirit and health. As estimated by the organizer, there were more than eighty thousand visitors in the Expo.

The Falun Dafa booth was located in the middle of the ground floor of the Expo hall. Passing visitors stopped and watched, or took the fliers and asked where the exercise site is and when the introduction seminar would be. 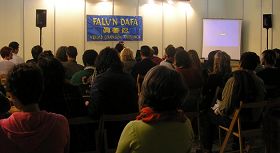 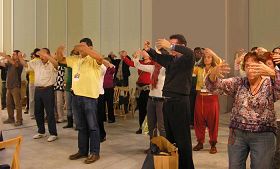 The Falun Dafa Association held a total of three seminars during the Expo with subsequent exercise instruction. There was almost no spare seat on the first day. Even more people came on the second day. The meeting room was crowded with more than seventy people after earlier participants told their relatives and friends to come. It was standing room only.

There were only two seminars arranged by the organizer for each participating organization. But because Falun Dafa was so popular, the organizer added an additional one for Falun Dafa.

A lady bought a copy of Zhuan Falun straight after joining the first seminar. On the second day she came again and said, 'When I got home after the seminar, I didn't know why but my tears kept flowing without reason. I felt as if a very big change had happened in my life and I found something that I had been always looking for." She said she would practice Falun Dafa.

Another lady who returned a second time said, 'Falun Dafa is very good, very good!' 'Just one day before the Expo, my arm was very painful, so painful that I couldn't even raise it. I was very worried and didn't know how I could deal with my job in the four days of Expo. After learning the first set of exercise in yesterday's seminar I found that the pain was gone'. While saying that she raised her arm, 'Look! It was cured completely!'.

After learning the truth, a gentleman who works for the city government said, "Spain suffered from Franco's dictatorship in the past. But the Spanish people got out of it in the end. I believe that the Chinese people will also get out of it." He signed a petition against the persecution, as did many other visitors. 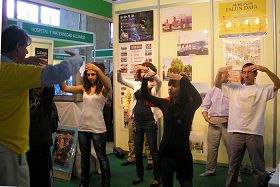 Learning the Falun Gong exercises right on the spot

Two days after the expo, a lady called saying that she had taken a Falun Gong flyer at the expo, but she was in a hurry and just put it in her bag. She didn't read it until arriving home. She said it was a feeling beyond words, deep in her heart, which pushed her make the call desperately telling the practitioners that she wants to learn Falun Gong. This is what she had been waiting for and looking for in her life. She said that when she read the flyer, she remembered that she felt a kind of very harmonious and also very powerful energy as she passing the booth and picked up the flyer. She hoped to invite practitioners to her hometown to teach her and a group of associates the exercises.

Falun Dafa was welcomed and praised by a great number of visitors at the 4 day Expo.

“Ottawa, Canada: Spreading the Good Message of Falun Dafa at an Event on Parliament Hill (Photos)”