Ottawa, Canada: Spreading the Good Message of Falun Dafa at an Event on Parliament Hill (Photos) 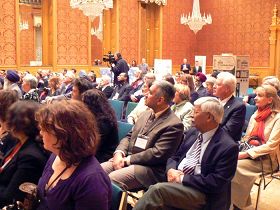 At a table introducing Falun Dafa, practitioners explained to the guests that Falun Dafa has spread to more than 100 countries, helping people purify their minds and bodies. Meanwhile, Falun Gong is persecuted in China. Many people stopped to learn the facts about Falun Gong and the persecution.

Chair of the Parliamentary Friends of Falun Gong: Our friendship includes actions in support of ending the persecution

Parliamentary Friends of Falun Gong (PFOFG) was founded in on October 1, 2009. The founding PFOFG membership is comprised of two senators and 18 Members of Parliament, including representation from all parties represented in Parliament. MP Bill Siksay, chair of PFOFG said in a recent interview, "I'm hoping this group can help the Parliamentarians, members of the House of Commons and the Senate have a better understanding of the practice of Falun Gong. We want to make sure that our friendship includes actions in support of ending the persecution [of Falun Gong]."

That night, MP Siksay said in an interview that he hoped Prime Minister would raise the issue of stopping the persecution of Falun Gong during his upcoming visit to China. He said, "I will hope that the Prime Minister will do that, he knows that in Canada many people has been concerned about China's human right record, regarding practitioners of Falun Gong, but also other people in China. The government has raised those issues in the past, to their credit." "The Conservative government, in particular, has raised those, so I hope that he'll continue in that tradition and along those lines, and make sure that he does that again on this trip to China. I think it's very important," he continued, "Canada is not perfect in human rights itself, but Canada does have concerns about other countries' record and China's record, so I would hope that the kind of relationship that Mr. Harper forges with China will allow those things be discussed and talked about as well as other things, maybe a little more positive as well."

Senator Consiglio Di Nino, one of the founding membership of PFOFG said in an interview, "It took a lot courage, It's not an easy thing to do right now to criticize China any time. They are obviously a strong economic power and anybody wants to do business with them, but my position is still the same. Falun Gong is peaceful, is non-violent, they have committed no crime that I know of, you know, leave them in peace, as I say many times, Falun Gong are Chinese, they are the sons and daughters of China, they should be allowed to practice their religion. Religious freedom is a fundamental principle."