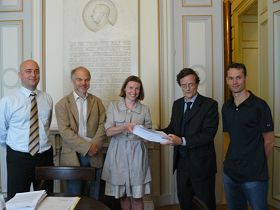 The two officials marveled at the big stack of signatures in support of the campaign to call on China to promptly stop its persecution of Falun Gong. They attentively listened to the account of the brutal persecution inflicted on Falun Gong practitioners in China. Matthias Slaats detailed the reason why the CCP launched the persecution and presented to the two officials the book, Nine Commentaries on the Communist Party, in Dutch and its DVD. Then, Senator Patrik Vankrunkelsven emphasized the CCP's crimes of organ harvesting from living Falun Gong practitioners. The two officials said that the Prime Minister would raise the issue of the persecution of Falun Gong with China's leaders on a suitable occasion during his visit to China.

Mr. Patrik Vankrunkelsven, a senator from the Liberty Party in the Flemish Community and chair of the Judicial Committee of the Belgian Senate, had personally investigated the organ harvesting issue, and thus further confirmed the independent investigation conducted by David Kilgour and David Matas. Mr. Vankrunkelsven said, "Our Prime Minister will depart for China in two days to attend the Beijing Olympics. He will also meet with Chinese officials. We will also ask them to discuss China's human rights problems, such as the situations of Falun Gong and Tibet." Mr. Vankrunkelsven added that he was very willing to come here to submit the petition because of his support for Falun Gong.

Nele Roegiest, Belgian representative of the CIPFG, said that every petitioner also has relatives and friends and will inform them of the persecution. She believes that more and more people will understand the persecution, and that the global anti-persecution petition will have a great impact on society, said Nele in her interview with the Belgian news agency outside the Prime Ministry.

In addition, the CIPFG offered the Belgian Prime Ministry the newly provided Torture Outside the Olympic Village: A Guide to China's Labor Camps. The Prime Minister's office was also alerted to the fact that the CCP had already removed the imprisoned Falun Gong practitioners outside Beijing. Similarly, several years ago when the crimes of organ harvesting at the Sujiatun concentration camp in Shenyang, Liaoning province were exposed, the CCP immediately removed the victims and destroyed the evidence.

So far the CIPFG has presented the global petition to end the persecution to the following countries and international institutes: Australia, New Zealand, America, Japan, Korea, Malaysia, Taiwan, Poland, Slovakia, Switzerland, Ukraine, the European Commission, and the International Olympic Committee.