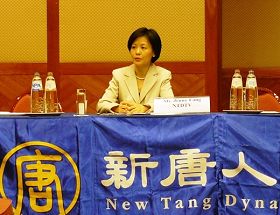 The International Federation of Journalists published a statement supporting NTDTV in its ongoing battle to broadcast uncensored programming to its Chinese audience despite pressure from the Chinese regime.

The International Federation of Journalists said in its statement "It is no surprise that the suppression of the NTDTV channel occurred precisely over the highly sensitive period of the Olympic Games in China and that the technical excuses do not seem to be founded. We expect Eutelsat to stop hiding behind technical mumbo-jumbo and let this broadcaster operate freely."

Eutelsat claims the shutdown on June 16 of NTDTV's signal on it's W5 satellite over Asia was caused by a "power generator subsystem anomaly."

On July 10th, 2008, Reporters Without Borders released the transcript of a recorded telephone conversation with a Eutelsat employee in Beijing, which revealed Eutelsat's behind-the-scenes technical manipulations to shut down NTDTV and satisfy Beijing's preconditions for major business.

Reporters Without Borders stated that this material shows that the shutdown was "a premeditated, politically motivated decision violating the free flow of information and the convention under which Eutelsat operates."

At a press conference in Brussels about NTDTV's signal disappearance, Ms Jenny Fang, NTDTV's Director for Corporate Relations, said "As we keep score on the medal counts in the Beijing Olympic Games, let's not forget to keep another score--on the promises China made to earn the right to host these games. Time and time again, it has been proven that the Chinese communist regime is not to be trusted."

She added, "Yet, influenced by the mighty dollar, we have governments, companies and individuals in the west, while enjoying the freedom over here, striking business deals with the Chinese communist party and assisting the regime with the control and the persecution of Chinese people."

Eutelsat's latest letter to the public claimed that TV transmission consumes more power than data transmission, and that's why they had to shut down the transponder NTDTV was on.

"As of August 1st, the U. S. Broadcasting Board of Governors (BBG) stopped its contract with Eutelsat. In the past it has been using transponder C2 to broadcast a series of VOA/RFA video and audio channels to China. BBG's withdrawal from C2 left more than the required capacity to resume NTDTV's broadcasts to China." Ms Fang stated.

Eutelsat's claims in its latest public statement that "Eutelsat holds no prejudice against NTDTV, and treats NTDTV in identical fashions as other carriers on W5 satellite". Yet in an interview a WOIPFG investigator had with the Chinese ambassador in Italy, Mr. Sun Yuxi, Mr. Sun confirmed that Eutelsat informed them right after the June 16 shutdown of NTDTV. The same behavior was confirmed by the July 10 Reporters Without Borders investigation report.

"We don't understand, from normal business practice, why Eutelsat had to inform the Chinese government right after the shutdown? To us, this act confirms that the shutdown was intended by Eutelsat to please the Chinese regime." Ms. Fang said.