At 6:00 p.m., on July 9, 2008, Polish Falun Gong practitioners arrived at a subway station in Warsaw, the Capital of Poland. With their display boards and stand set up, the practitioners started their anti-persecution petition drive which would last for weeks, two hours each day. Meanwhile, they told people about Falun Gong and about the persecution. 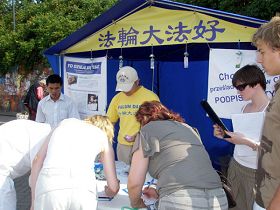 Though in a hurry, passers-by stopped to express their support. In no time, numerous Polish people gathered in front of the display boards. The CCP's violent acts displayed on the boards shocked viewers. People repeatedly asked the same questions: "What is Falun Gong?" "Who could persecute innocent people this way?" "Is this currently happening in China?" or "Is live organ harvesting true? It's so cruel!" After being informed that China is still under the CCP's totalitarian rule, Polish people who had themselves suffered under the rule of a communist party immediately realized the facts. They lined up to sign the anti-persecution petition. At first the petition was signed by two people simultaneously, then by four people, then by six, and then by eight, at most. People still kept lining up to sign.

An older lady in her eighties said, "The communist party is very evil and would commit wrongdoing in every possible way. Stalin and Mao Zedong were tyrannical killers. Now there comes a new one, called Jiang Zemin, who is even more evil than his predecessors." Then she wrote her name clearly on the petition--Laura Staniskiewicz.

When a mother was signing the petition, her six-year-old son next to her asked, "Why are you signing your name?" The mother pointed at the photo of Gao Rongrong, a Falun Gong practitioner who had been tortured to death, and said to her son, "Did you see that? If we want to stop such a terrible thing from happening again, we must sign the petition!" "Mom, I want to sign my name. I have learned to write my name!" The mother helped her son to finish other blank parts of the form, and the six-year-old boy who had just learned to write signed his name attentively stroke by stroke.

Two policemen who were on duty came forward to take a look at the display boards and then read the explanation on the petition. Afterwards, they signed the petition without hesitation. Before leaving, they told the practitioners to contact the police if anyone came to make trouble. They also asked with the practitioners to tell them the number of petitioners every day. They were really concerned about the issue, and if they could know the number of petitioners, they would feel more assured.

An overseas Chinese came up to the stand. After reading the Falun Gong leaflets, he said that back in China he had been informed about Falun Gong by Falun Gong practitioners. One day he was away from home for work. Late at night on his way back home, he was mistaken as a Falun Gong practitioner and arrested. After severe questioning, he was finally released. He said with anger, "The communist party is an organization of bandits. There is no good person among the communist police." Right on the spot he quit all the CCP-related organizations.

An older lady signed the petition, but kept standing there. Listening to the Dafa music JiShi and PuDu, she lifted her head toward the sky and seemed to search for something. She asked the practitioners, "Did you hear that? The music comes from the heavens."

A young girl rushed to the stand on the final day of the petition. "Please give me another lotus flower. I had signed the petition and took a lotus flower. I happened to visit a patient in the hospital that day. When seeing the lotus, the patient felt much better, so of course I let the patient keep it. The lotus is miraculous. Can I please have another one?" pleaded the girl.

One week passed by. In the meantime, Polish Falun Gong practitioners witnessed the awakening of the Polish people, who bravely chose to stand on the side of justice. A large number of senior citizens with the help of their walking sticks lined up to sign the petition; numerous mothers pushed their baby strollers up to the table to sign the petition; the petitioners included mothers and daughters, fathers and sons, students, a Ukrainian who worked as a migrant worker, a Vietnamese who served as a cook, a Thai teacher, a Danish doctor, an Australian flight attendant who happened to pass by, and people from Korea, the U.K., Palestine, Scotland, Bulgaria, and Iran.

During one week, over 3,000 people signed the petition. They were not kept away by the daily storms or the thunder and lightning. They condemned the CCP's persecution of Falun Gong; they protested against the coexistence of the Olympics and crimes against humanity in China.

“Taitung, Taiwan: Candlelight Vigil in Memory of Practitioners Who Were Tortured to Death (Photos)”