On July 20, 2008, Falun Gong practitioners in Tokyo held a rally and march, as well as a candlelight vigil, to protest the Chinese Communist Party's (CCP) ongoing persecution of Falun Gong. 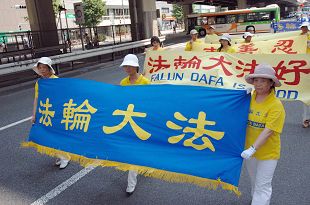 Falun Gong practitioners march against the persecution in Tokyo 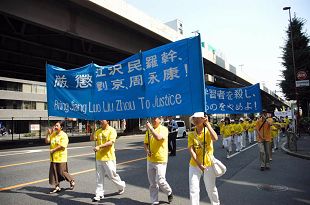 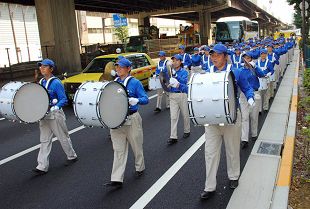 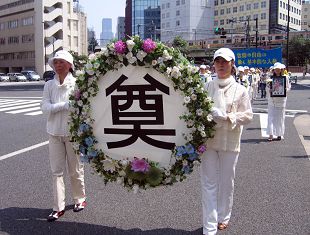 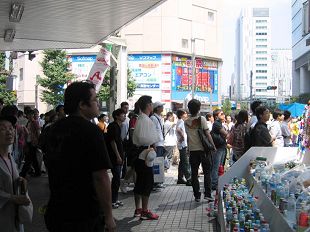 Locals look on as the march goes by

At around noon, a rally was held at the Danlu Park of Tokyo. A representative from the Falun Dafa Association of Japan said that the Chinese Communist Party's (CCP) persecution of Falun Gong has continued for nine years, and it was time to disintegrate the CCP and bring an end to the persecution. Vice president of the Asian chapter of the Coalition to Investigate the Persecution of Falun Gong (CIPFG) also addressed the rally and announced that the "Million Signatures" petition campaign initiated by CIPFG has collected 1.14 million signatures to date.

At 1:30 p.m., Falun Gong practitioners began a one-hour march through Tokyo. During the march, practitioners displayed a series of banners in Chinese and Japanese which read, "Falun Dafa is Good", "Truthfulness, Compassion, Forbearance", "Disintegrate the CCP, End the Persecution", "Freedom of Belief is a Fundamental Human Right", and "Heaven Eliminates the CCP, Heaven Protects China". The Divine Land Marching Band led the way, followed by ladies dressed in white and holding wreaths and photographs in memory of Falun Gong practitioners who had died as a result of the persecution. Behind them was a display exposing the brutal persecution, which was followed by a group of practitioners demonstrating the exercises. The last group in the march called for support for the movement to withdraw from the CCP and its affiliated organizations.

The march drew the attention of many pedestrians, who asked the practitioners who distributed materials on both sides of the route about Falun Gong's situation. Many of them were outraged and condemned the persecution, and signed the petition to call for an end to the persecution.

A middle-aged Japanese man who also spoke Chinese told the reporter that the CCP dictatorship is an autocratic regime. He already knew about the 1989 Tiananmen Square massacre, and upon learning about the persecution of Falun Gong, he said that the CCP has not changed.

According to two Sudanese refugees named Akasha and Jamoos, the CCP regime has entered into trade agreements with the Sudanese government and begun dam construction in Sudan. This forced local residents to move and find alternative shelter, and people who opposed them suffered persecution. When Akasha learned of the persecution of Falun Gong, he said that it was implementing terrorism and persecuting its own people.

A tourist from France named Nicolas followed the march along the way. He told the reporter that two years ago, he had heard of the organ harvesting atrocities against Falun Gong practitioners in China. "This is unbearable," he said, "The Communist regime often brings up the Nanjing massacre, in which Japanese troops murdered Chinese people, but what they do to their own citizens is just as terrible. Furthermore, this is not happening in war time, but during a time of peace in a country that is about to host the Olympic Games. This regime's false compassion is unbearable." Nicolas signed the petition to call for an end to the persecution and happily accepted a paper lotus flower from practitioners.

Ms. Shiqiao, a Chinese lady who had lived in Japan for ten years, said that before she practiced Falun Gong, her health was quite poor. After she began practicing, she has had great health over the period of the last ten years. "Today is the first time that I have participated in such an activity, and I feel deeply inspired. When I held the photograph of a fellow practitioner who was tortured to death, I could not stop my tears from streaming down. These people were the same as myself, in pursuit of physical and spiritual health. Where is the crime in that? I call for all people, whether they practice Falun Gong or not, to help bring an end to the persecution. Falun Gong is such a good practice, and we should let every person in the world know about that."

From 6:00 p.m. to 9:00 p.m., the practitioners held a candlelight vigil in front of the Chinese Embassy in Tokyo to commemorate practitioners who have died as a result of the persecution and to protest the CCP's persecution of Falun Gong.