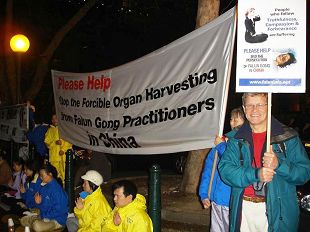 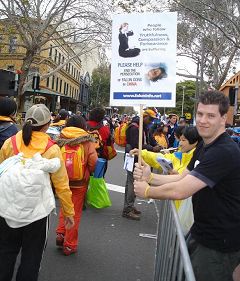 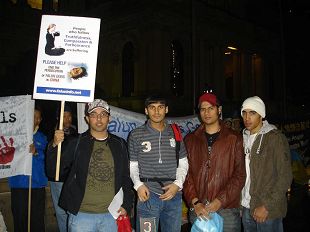 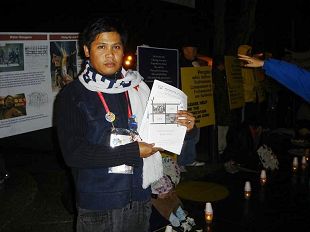 Damien Burke, 20, is from Sydney. He is studying while working part time for a local government department in psychological consultation services. He once used Falun Gong as a topic in a paper that he wrote. On July 20, at the entrance to Central Railway Station in downtown Sydney, he was holding a sign for Falun Gong practitioners. He called on young people attending "World Youth Day" to help stop the CCP's persecution of Falun Gong.

He told the reporter, "I found out about the persecution of Falun Gong from the Epoch Times newspaper about two years ago. I think they [Falun Gong] should be entitled to the same dignity as every other human being and the human rights that everyone else deserves. I know that Catholics are also persecuted in China because Communism doesn't accept any form of religion. I'm here for World Youth Day and have been a Catholic all my life. I hope to help people understand that Falun Gong practitioners are here to call on the Chinese Communist Party to stop the persecution, but not to ask people in other religions to come to join in practicing Falun Gong."

An Australian man named Duncan Sutherland held up a display board at the candlelight vigil held outside the Sydney City Hall. He stood among Falun Gong practitioners, and then walked out to talk to passersby about the persecution. He said, "I believe in the universal truths of Truthfulness-Compassion-Forbearance. I believe that human rights are the entitlement of all people in the world and I believe the people here supporting this cause are people with good hearts and they deserve my support, so I have come here to assist in any way I can."

He also said, "I know a little bit of the history because I have had a chance to read on the Internet and also for two years I have been to the Chinese New Year Spectacular shows and read a lot of material. I have read the Matas-Kilgour report ("An Investigative report on Organ Harvesting of Falun Gong Practitioners by the Chinese Communist Party") and a lot of media reporting on this in Australia last year when they came here. I took a bit of an interest in what this story was about, and it is a very, very frightening and very, very terrible story. I think too many governments in the world are wanting to play down this problem because of worries about political pressure or economic pressure from China. So I think the Australian government, particularly, should be forthright in taking these issues to the Chinese government."

He continued, "But spiritual freedom is the entitlement of everybody, everyone in the world should be entitled to spiritual freedom. And we shouldn't be persecuted for spiritual freedom. Persecution of people on spiritual or religious grounds is not a new thing, but the extent to which the Chinese have taken it is a new low I think, particularly in relation to organ harvesting, because organ harvesting is a true evil. It is worse than what Adolph Hitler was doing in the Second World War. I think it is everybody's responsibility to speak out and to stand up about this, as it is a blight on humanity that some human beings can do this to other human beings in the 21st century. So I hope that pressure can be brought to bear on the Chinese government to stop it. It is a shame to China that this sort of thing could happen."

Ritche Tarpio, a young man from Qatar, was in Sydney to celebrate World Youth Day. When he learned about the persecution of Falun Gong, he said, "I really don't like killing, I don't like persecution. We Catholics are pro-life and whatever belief other people have, that is their right, and anyone who is against life is against God. So I would like to get more copies of this pamphlet and I will tell people that there is a disaster happening in China. I believe this has to be stopped."

Ahmed and three friends from Dubai in the United Arab Emirates saw the candlelight vigil. He stopped and held up a display board. He asked how they can join in efforts to call for an end to the persecution of Falun Gong and what they can do to help.

Ahmed said, "We came to Sydney for a holiday and passed by and saw what was happening. I have volunteered to collect signatures in my country. We need to stop all this. When I saw the families sitting here with the pictures of their relatives, I felt really sad and I hope all this will stop soon."

“Japan: Practitioners Gather in front of the Chinese Consulates in Fukuoka and Nagasaki to Protest the Persecution (Photos)”